by Rick on September 5, 2019 in Featured, The Rusty Satellite

The Rusty Satellite Show turns  up at some of the most interesting spots in the city. This week the destination is La La Land, an amazing recording studio where I talked with Anne Gauthier, head engineer. Anne, a Canadian, runs the show here, where every significant local band and many major acts come to lay down their tracks. Thanks to the investment of a new ownership group, headed by Gill Holland, the Lexington Road facility boasts some high-powered, state-of-the-art equipment.

Locals who know wine know The Wine Rack, the establishment John Johnson has been running for 16 years. Johnson knows wine and he knows what it takes to compete with bigger competitors. The Wine Rack has a full event schedule (Free Samples) and you can call on his expertise about wine form all over the world.

In the news, the biggest story to come out of U of L’s 35-18 loss to Notre Dame was a cheerleader’s broken nose. After a year and a half and $28 million, the Clark Memorial Bridge has a new coat of yellow paint. And we’ve got about 60 days of political ads to endure if you watch local TV.

Next Tuesday, it’s the Breakfast of Champions, featuring former Rusty Satellite Show guest Whitney Austin, who survived a mass shooting in Cincinnati a year ago and now runs an organization devoted to preventing gun violence. Join us.

While the show was recorded on location at La La Land and The Wine Rack, it is produced at the REMAX Properties East studios on Timberwood Circle, where your host is a realtor with the Sokoler Team. Call me at 502-439-6391 with any questions about local real estate, and look for your next home right here. The show’s sponsors are the Eye Care Institute, Passport Health Plan and Heuser Health. Thanks for listening. 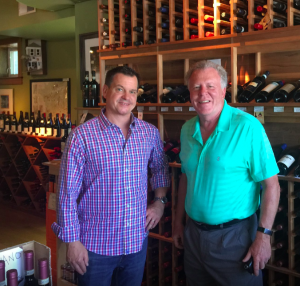 with John Johnson at the Wine Racki