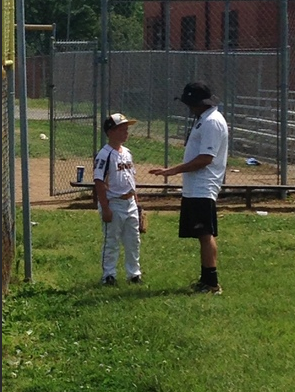 Louisville, Ky., – Louisville’s Aaron Flaker has been named one of nine national finalists by Ripken Baseball for Youth Baseball Coach of the Year.

Flaker, a former U of L Cardinal Bird and All Region centerfielder at Male High School, is the founder of the Louisville Sting Travel Ball Program that has been making waves in tournaments throughout the Midwest and South.  See www.LouisvilleSting.com.

A team parent nominated Aaron for the honor:

Aaron Flaker of the Louisville Sting 8U Yellow has compiled quite a win/loss record with his squad but it’s the way he does it that has every 8, now 9 year old in Louisville trying out for his team.

His passion for the game is contagious and his love for the boys on his team is obvious. Every parent wants a coach who will not only teach their child about the game of baseball but relate those lessons to the game of life and Aaron does this. The respect these 8 Year olds have for Aaron is truly remarkable.

Let me explain the picture above, the boy in the picture had been struggling at the plate and prior to the next game I caught this picture of Aaron talking to the boy. What Aaron said, I don’t know, what I do know is his struggles at the plate ended that next game.

One other example, we were at a public batting cage when I caught Aaron helping a random boy on his swing. In the few minutes Aaron helped this boy you could see the difference in his swing and the smile on the boys face was priceless.

Aaron has a passion for baseball and loves to help others, there’s no other coach I’d rather my son play for and would love for Aaron to be considered for this award.