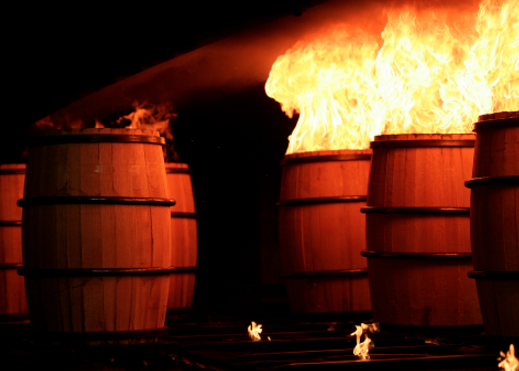 LOUISVILLE, Ky.–(BUSINESS WIRE)–The Brown-Forman Cooperage celebrated 70 years of continuous barrel-making excellence with a commemorative ceremony at its Louisville location on February 10, 2016. Brown-Forman is the only major spirits company to own and operate a new whiskey barrel-making facility.

Founded in 1945, the Brown-Forman Cooperage is home to roughly 300 employees where more than 2,500 barrels per day are hand-crafted for the aging of spirits such as Jack Daniel’s, Woodford Reserve, Old Forester, Early Times, Canadian Mist, el Jimador, and Herradura. While these products are found globally around the world, their journey to the bottle began at a Brown-Forman Cooperage.

“No matter where you are in the world, in 165 countries, if you have a glass of Jack Daniel’s, Woodford Reserve, Old Forester, Early Times, or our tequilas, Herradura and el Jimador, keep in mind that every drop was aged in a barrel that one of our cooperages made,” said Chris Morris, Brown-Forman master distiller and spirits historian. “One-hundred percent of the color and arguably more than 50% of the flavor are the result of the work the men and women at our cooperages have done.”

In 2016, more than 600,000 American White Oak barrels will be produced at the Brown-Forman Cooperage. Due to the growing demand for bourbon and other American whiskeys, the Brown-Forman Cooperage operates and produces barrels for more than 16 hours a day. During today’s celebration, the cooperage employees were honored for their pride, commitment, and dedication to their craft.

Throughout the ceremony, guests were reminded just how much the Cooperage meant to the employees, the distilling process, and ultimately the whiskey that is loved by consumers around the world. “As you leave here, I encourage you to look at the banners that hang from the ceiling, said Alex Alvarez, senior vice president, chief production officer, Brown-Forman. “We don’t make Jack Daniel’s here. We don’t make Woodford Reserve here. We don’t make Old Forester here. We don’t make Early Times here. We make them better.”

The ceremony concluded with a commemorative “barrel roll” by the most senior employee, Charlie Harden, who has been working at the Cooperage for more than 40 years. At the end of the “barrel roll” Charlie and his other team members were the first to sign the commemorative barrel.

Brown-Forman also has a cooperage in Decatur, Alabama, where it makes barrels for Jack Daniel’s Tennessee Whiskey.