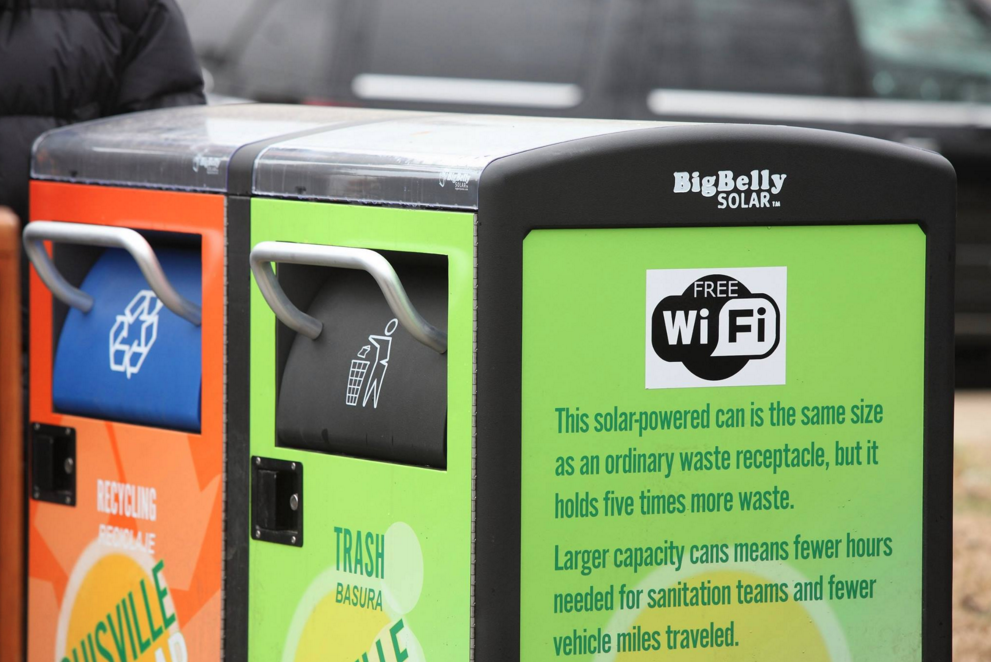 Two Big Belly trash and recycling units in Russell have been transformed into 4G Wi-Fi hot spots units, the first Big Belly 4G hot spot units in the world. And, they are solar powered.

“For Louisville to successfully transition to a high-tech and advanced manufacturing economy, every one in every neighborhood must have access to the Internet,” said Fischer.  “Today’s announcement is one step toward getting our entire city wired into the 21st Century economy.”

The Big Belly 4G hot spot units are located at TARC stops on Market Street at 25th and 28th streets.

Those are along one of the city’s most popular public transit routes, and each hot spot emits a radius of about 100 feet of coverage.

Market Street is on TARC Route No. 15, one of the top five routes for total ridership in the TARC system.  Average weekday trips on that route number more than 2,200. The new Internet service will allow riders to check schedules and real-time bus arrivals.

“Wi-Fi at bus stops benefits the growing number of TARC passengers using our mobile website to plan their trips and find out when their bus will arrive.   Metro’s partnership with TARC makes catching a bus at these stops an easier and more convenient option – as simple as tapping into the Wi-Fi and visiting  www.ridetarc.org,” said TARC Executive J. Barry Barker.

Residents and businesses within the coverage area also will have access to the free Internet service.

The Big Belly Wi-Fi hot spots are solar powered and operate between 8 a.m. and 6 p.m. Those hours will lengthen during the summer months.

In July, Fischer and his Office for Performance Improvement and Innovation (OPI2) installed Internet service and “Points of Presence” at two locations, adding a third in January:

“Over the last six months, the data shows people are using the free Wi-Fi,” Fischer said. “There is a demand for better connectivity in Russell. It is a must, whether you are a child who wants to excel in school, an adult who needs additional training to get a promotion at work, or a business that wants to attract and keep customers.”

At the two original hot spots, near the site of the proposed FoodPort, nearly 1,000 people have used more than 100 GB of data.

“These new hot spots expand the scope of the West Louisville Wi-Fi Project. We will look for additional opportunities to install access points in key locations to ultimately create a network,” said Ted Smith, chief of Civic Innovation for Louisville Metro Government. “Our biggest lesson was that this network can only be as fast as the fiber in the ground, so we will continue to work on that front as well.”

This coincides with the administration’s overall work to improve the speed of the city’s existing and future Internet capabilities, including the Google Fiber efforts, improvements to franchise regulations and bonding requirements, and innovative technology efforts such as the Big Belly 4G hot spots.

Additional Information: Big Bellies are solar-powered compaction units that increase station  waste capacity by five times that of conventional bins. Smart sensors notify the city when the station is getting full so that collections are done only on an as needed basis, reducing waste collection costs by up to 70 percent per year. Additional environmental and social benefits include reduced truck traffic and cleaner streets.