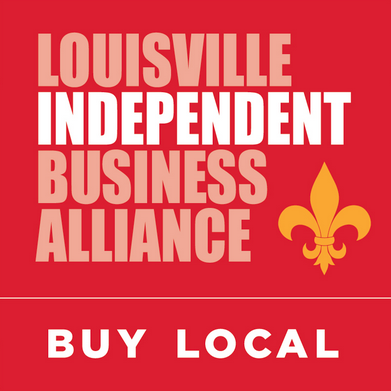 Louisville, KY (April 1, 2016) – For the first time since the original “Keep Louisville Weird” billboard went up on Bardstown Road more than 10 years ago, the Louisville Independent Business Alliance (LIBA) is pleased to launch a new public media campaign promoting the “buy local” message. Last year, LIBA was granted the Advertising Federation of Louisville’s Dream Team and Public Service campaign grant, and after many months of developing new creative and securing donated media placements, the result is a cost effective way for LIBA to create awareness and educate Louisvillians about the importance of buying local.

Bandy Caroll Hellige took on the creative for the project, which included print and billboard ads, radio, cinema and television ad production, and a new logo and brand standards for LIBA. The creative work features headlines stated inside talk bubbles, with the following phrases: “Keep Your Money Close To Home,” “What Spends Here, Stays Here,” “Keep Louisville In The Money,” and “Bring It On Home.”

The messages reinforce LIBA’s focus to encourage area residents to view themselves as members of a community, rather than merely as consumers. Supporting local businesses gives our city our unique flavor, our weirdness, and it also reinvests $55 into the community for every $100 spent.
“Believe it or not, we haven’t done a general awareness ad campaign since that first ‘keep Louisville weird’ billboard went up in 2005,” says Jennifer Rubenstein, Director of LIBA. “All of our communications have been fairly grass roots, which says a lot that we’ve been able to come so far with just that.”
“The new ads give voice to our message about why buying local is important,” says LIBA board vice president Summer Auerbach. “The board and members of LIBA hope the public enjoys the message as much as we do, and heeds the call to keep their money close to home.”
The ‘talk bubble’ idea featured in the ads is also being carried through to a series of graphics created by Kertis Creative that will be used on LIBA’s social media pages.
A special web page including examples of all the creative, along with the media who donated ad placement, can be viewed at www.keeplouisvilleweird.com/Media-Campaign.
LIBA has come a long way since former owner of Ear X-tacy and LIBA’s Founder John Timmons caught the public’s attention by putting up a billboard saying Keep Louisville Weird in 2005. What started as an alliance of a handful of local businesses has grown to over 800 members, which puts LIBA in the top 5 of all independent business alliances (IBAs) across the country. The organization just published the 13th Buy Local Guide, with 40,000 copies distributed – that’s a total of more than half a million Buy Local Guides over the years. LIBA’s Buy Local Fair has become a ‘can’t miss’ event in Louisville, and the Louisville BrewFest draws attendees from all over the region to check out Louisville’s thriving local beer scene. Both events have attendance of 6,000+. LIBA also hosted the national IBA conference here in Louisville in 2012.
LIBA would like to thank Ad Fed Louisville, the talented team at Bandy Carroll Hellige for their pro bono work, and the following media outlets that contributed to this campaign: Alpha Media, Business First, the Courier-Journal, NCM Media Networks, Outfront Media, Time Warner Cable, USA Image, Welch Printing and WLKY. We also want to recognize many media partners who have supported us throughout the years, including Louisville Magazine, LEO, Louisville Public Media, WAKY, Louisville.com, revenewtree,louisvillehotbytes.com, and Insider Louisville.
* High res photos available upon request.
About the Louisville Independent Business Alliance
LIBA is a non-profit organization whose mission is to preserve the unique community character of the Metro Louisville area by promoting locally-owned businesses and to educate citizens on the value of buying locally. For more information about LIBA, visit www.keeplouisvilleweird.com.