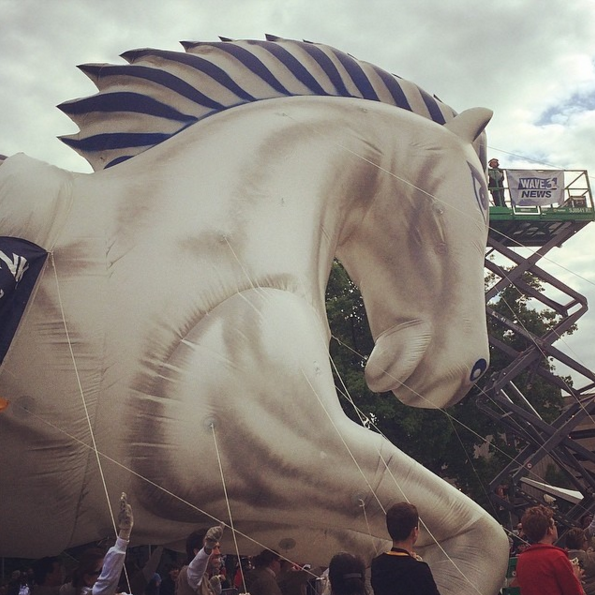 Louisville, KY.  – The line-up is set for the 2016 Republic Bank Pegasus Parade.  Floats and inflatable units participating in this year’s parade drew for positions at a special event April 5, 2016, at the Kentucky Center. “Fun for the Arts” will be the theme for the Derby Festival’s oldest event, which will feature approximately 100 units marching down Broadway on Thursday, May 5th.

Said Kentucky Derby Festival President and CEO Mike Berry: “The arts and the Derby Festival go hand-in-hand in helping to form the cultural fabric of our community. Whether we are sharing an educational moment with a student or being thrilled by a big production on a professional stage, we are creating memories that will live on after the curtain falls. The Festival is paying tribute to all those groups who bring the arts to us and you will see many of them in the parade this year. It will be 2016’s biggest hit on Louisville’s Broadway!”

The parade theme will be used by sponsoring companies to help direct the building of floats and costuming of the inflatable handlers and crew. The floats and inflatables compete for various awards based on originality, eye appeal, theme representation, animation, attention to detail and enthusiasm. Marching bands use the theme to help with musical selection and it is the basis of costume and concept design for the other marching units. The annual spectacle marches west on Broadway from Campbell to Ninth Street.

The 2016 Parade will feature 11 floats, many of them built by the employees of the companies sponsoring them. The following companies drew for their float position in the parade at tonight’s event, as well as the sponsors of the eight participating inflatable character balloons.

CenterStage/J Arts & Ideas at the JCC

Spectators will have an opportunity to preview each float at the Republic Bank Derby Festival Parade Preview Party on Tuesday, May 3, at the Kentucky exposition Center, in South Wing C. This event will offer a taste of nearly the entire parade. Character balloons, equestrian-estate/”>equestrian units and assorted VIPs will join the floats on display for the indoor tour “inside” a parade. Admission is a 2016 Pegasus Pin. Tickets for the Parade are on sale now online at www.kdf.orgor by calling the Derby Festival Hotline at (502) 584-FEST. Ticket prices are $10 for bleacher seats, $12 chair seating and $30 review stand seats.