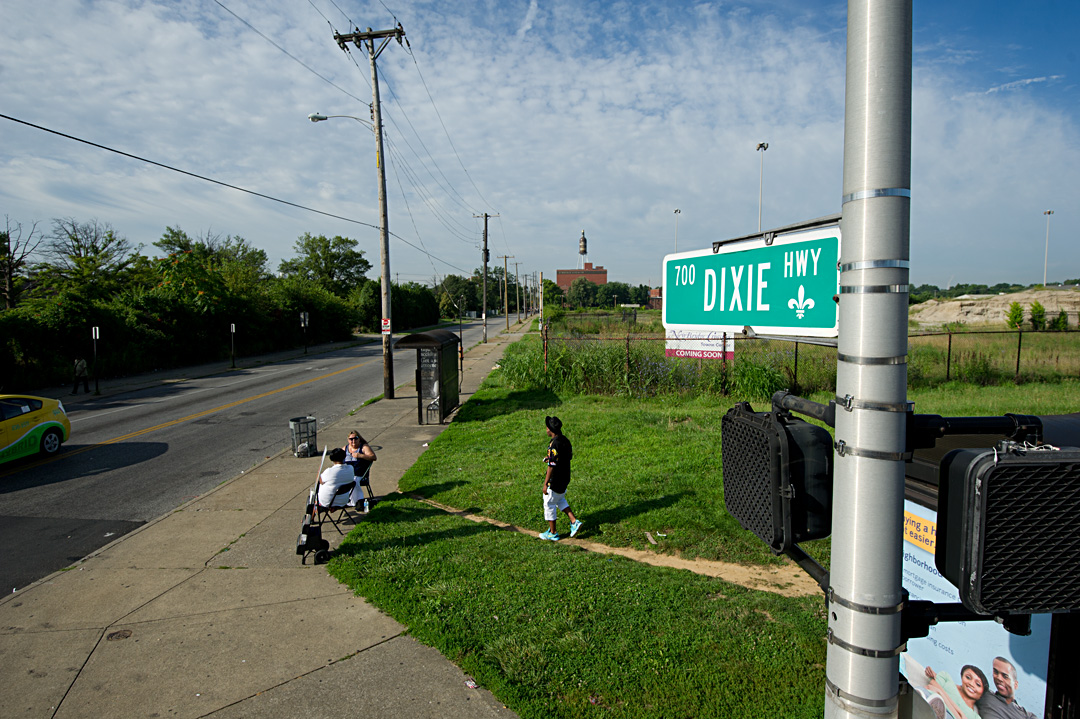 LOUISVILLE (Aug. 31, 2016) – More than $50 million in transportation improvements under way and planned over the next two years will create a New Dixie Highway and fuel transformation of a major economic corridor for southwest and west Louisville, Mayor Greg Fischer announced today.

“The New Dixie Highway project is the largest concentrated investment in Louisville’s transportation network since we began the Ohio River Bridges Project,” Fischer said. “Over the next several years, we will create a new Dixie Highway that’s safer for everyone, more efficient for motorists, more reliable for transit users and more enticing for business owners, consumers and investors.”

Fischer, Congressman John Yarmuth, Metro Council members and other leaders provided the New Dixie Highway update at the soon-to-be-completed Kroger Marketplace, a $23 million grocery and retail superstore at 4915 Dixie Highway. The location is appropriate, Fischer said, because the project builds on the renaissance already under way on the corridor, with tens of millions of dollars in private investments in new restaurants, retail businesses and other developments.

Safety improvements will include new signal technology throughout the corridor, and median enhancements, dedicated turn lanes and defined crosswalks concentrated in the Crums Lane to Greenwood Road segment. Future phases will address other segments of the road.

Fischer thanked state legislators and Metro Council members for their commitment to improving safety and mobility along Dixie Highway, noting that without their work to secure state and local matching funds, the city would not have been able to leverage the federal grant to jump-start the project.

Citizens will get a chance to learn more about the planned improvements and provide input on preliminary designs through several public engagement options, including two upcoming open house meetings:

Citizens can also get more information, ask questions and make comments through a project website (TheNewDixieHighway.com) and social media channels, including Facebook and Twitter. Metro government, TARC and the project design team will use feedback from the public and an advisory team of community leaders to help finalize design and gain the required federal approvals.

Fueled by a $16.9 million federal TIGER grant, the New Dixie Highway project will include a new bus rapid transit line along Dixie Highway from around the Gene Snyder Freeway to Broadway, and connect to the downtown business district. It will include specially designed vehicles and bus stations that will reduce travel times for riders and increase reliability along Louisville’s most used public-transit corridor.

“This strategic investment in a proven transportation solution will help transit users get to work, to stores and back home faster and more reliably than today,” Yarmuth said. “That’s important for working families, employers and our regional economy.”

The $50 million overall investment – a combination of federal, state and local dollars – also includes $14.5 million in pavement replacement and resurfacing underway along a five-mile segment from Stonegate Manor Drive to Greenwood Road.

That phase of the project, overseen by the Kentucky Transportation Cabinet and performed by Hall Contracting, was delayed by utility relocations and weather-related issues, but is now scheduled for completion by spring 2017.

Another $2.5 million in resurfacing work is planned next year for the Dixie – a two-mile section from Algonquin Parkway to Maple Street and a six-mile section from the Jefferson/Hardin county line to Stonegate Manor Drive.

At the Watterson expressway interchange, a $2.5 million project to clean and repaint the Dixie Highway overpass is under way, and construction will begin in early 2017 on $800,000 in safety improvements that include a new sidewalk along the east side of Dixie and ramp and signal improvement at the westbound I-264 Shively exit.