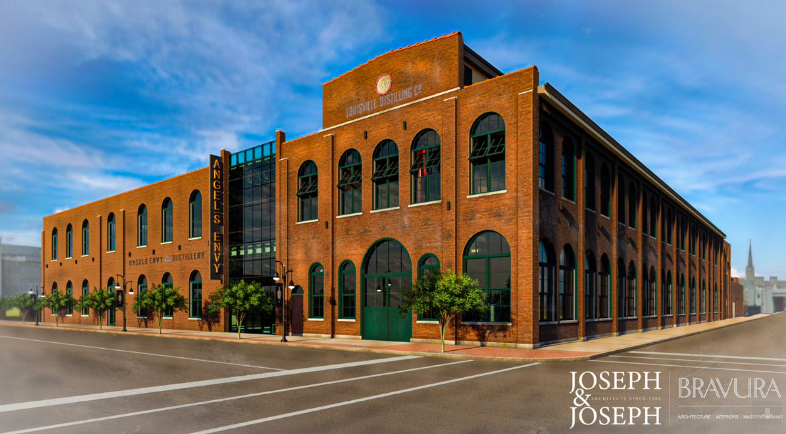 The $8.2M expansion will double guest capacity at the home of ANGEL’S ENVY and create approximately 20 new jobs in Louisville.
Construction began in late 2020; the completed expansion is expected to open to the public in Spring 2022
LOUISVILLE, KY (July 13, 2021) – ANGEL’S ENVY®, the Louisville-based craft distiller that produces small batch, finished whiskeys, unveiled the details of the upcoming $8.2M expansion to its downtown Louisville distillery tour. The expansion will add more than 13,000 square feet to the brand home, including a new event space and bar, a larger retail space and several new tasting rooms. It will increase annual guest capacity by 64,000 and create approximately 20 new jobs in Louisville. Construction began in late 2020 and is expected to be completed in Spring 2022.
“Since opening the doors to our distillery in 2016, we’ve been so fortunate to see an increased demand from guests hoping to visit us and take part in tours, experiences and classes. This expansion will double the number of fans we’re able to meet and raise a glass of Angel’s Envy with throughout the year,” said ANGEL’S ENVY Co-founder and Chief Innovation Officer Wes Henderson. “We’re proud to call Louisville our hometown and contribute to its continued growth by creating new jobs for Kentuckians and offering a new reason for people to visit downtown and the Kentucky Bourbon Trail as a whole.”
Specific additions to the distillery experience will include: an additional bar space, where the ANGEL’S ENVY team will continue to craft cocktails for reservation and event guests; five new tasting rooms, where guests can partake in educational bourbon tastings; an event space and full catering kitchen, allowing the distillery to be used for pairing dinners and private gatherings such as conferences and corporate events; and a designated room for ANGEL’S ENVY’s “Bottle Your Own” experience, which, post-expansion, will offer guests the chance to fill their own bottles of ANGEL’S ENVY’s distillery-exclusives.
“ANGEL’S ENVY is a prime example of how Kentucky’s signature bourbon industry immensely benefits our commonwealth by attracting visitors to the state while creating quality opportunities for Kentuckians. This expansion proves we can expect more great things from ANGEL’S ENVY as our state’s economy continues to strengthen,” said Kentucky Gov. Andy Beshear. “Tourism is a crucial component of our vision to build a better Kentucky for all our residents, and this development brings us another step forward in bringing that vision to fruition.”
The ANGEL’S ENVY brand home expansion would not be possible without the ongoing or continuous support of the Kentucky Distillers’ Association, the Kentucky Governor’s Office, Kentucky Tourism, the Louisville Mayor’s Office, Louisville Forward and Louisville Tourism. It is one of several recent growth projects for ANGEL’S ENVY, following news from 2018 that the brand would be constructing three new rickhouses on its property in Henry County.
The ANGEL’S ENVY distillery will remain open to the public throughout the construction process; for more information about current offerings at the distillery, please visit angelsenvy.com/distillery.