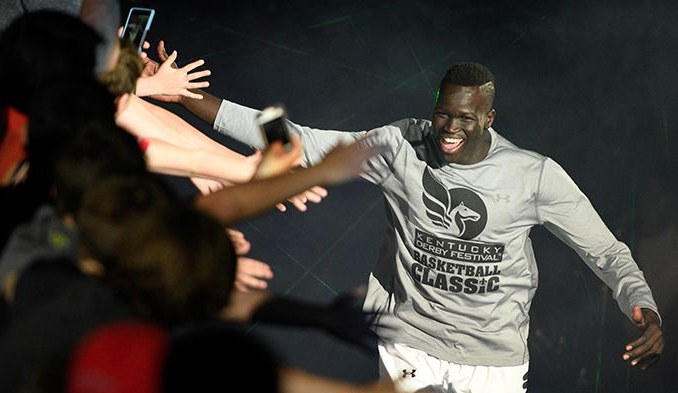 “The players recognize that this game is played in front of the greatest and most knowledgeable basketball fans in the world,” said Keith Conrad, Recruiting Co-Chair. “We expect for them to put on quite a show.”
“We are very excited about this group of players. We know we have a strong group who will carry on the storied tradition of this event,” said Mike Gandolfo, Recruiting Co-Chair.
Jim Shannon, Head Coach of the New Albany High School Bulldogs State Championship Team, will be one of the All-Star Team coaches, joining Coach Richard Gatewood from Taylor County High School. His Cardinals made it to this year’s Kentucky Boys Sweet Sixteen quarterfinals.
First held in 1973, the Derby Festival Basketball Classic is the oldest high school all-star game in the nation. The game has featured such players as Jamal Mashburn, Rex Chapman, Moses Malone, Isiah Thomas, Dominique Wilkins, Eric Bledsoe, Deron Williams and Nolan Smith, among many others.
Admission to the Horseshoe Foundation Night of the Future Stars is free with a ticket to the Basketball Classic. Some of the event’s most exciting moments have occurred during the Slam Dunk, 2-on-2 and 3-Point Shooting competitions. There will also be a one-hour autograph-signing session following the event, with a two-item limit for signing.

ON SALE NOW, Basketball Classic Tickets  cost $18 in advance ($20 at the door) and $50 for VIP Courtside seating. Tickets are on sale at all TicketMaster locations,www.ticketmaster.com or call (800) 745-3000 or the Freedom Hall box office at (502) 367-5144 (Includes facility fee).
The Basketball Classic is presented by Papa John’s, with Contributing Sponsor Horseshoe Foundation of Floyd County.  Media Sponsors are 99.7 DJX, B96.5 FM, Old School 105.1 and SLAM Magazine.
2016 KENTUCKY DERBY FESTIVAL BASKETBALL CLASSIC ROSTER
AS OF 4/4/2016