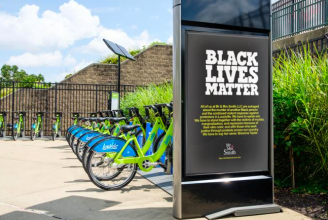 Displaying a message for equality throughout Louisville. All lives do matter. But all lives will not matter until Black lives matter.

Louisville Bike Share known as LouVelo (operated by CycleHop) has partnered with Louisville web designer and graphic artist, Mr. and Mrs. Smith LLC to display a series of posters on bike stations across Louisville featuring a message in support of Louisville’s Black Lives Matter movement.

When asked as to why Black lives matter, Jason Smith, founder of the Louisville Web Design firm reacted “They matter since they are children, siblings, sisters, moms, and fathers. They matter on the grounds that the treacheries and injustices that they face take from us all — white individuals and non-white individuals the same. They take away our very mankind and humanity.”

LouVelo wanted to send a message of hope and support for the residents of Louisville, KY. Matthew Glaser, General Manager of LouVelo said “We support Black Lives Matter and the equal and fair treatment of all.”

The messages also display quotes from Dr. Martin Luther King Jr. such as “Change does not roll in on the wheels of inevitability but comes through continuous struggle” to remind us that we must continue to work for change and progress.

Other Louisville businesses chimed in too including Hilltop Tavern, on Frankfort avenue; The Louisville Jazz Society and Louisville Attorney, Graham Whatley who all sponsored posters in support of this message of hope and for equality in Louisville.

About Lou Velo LouVelo is Louisville’s official bike share company. The program launched on March 25, 2017 and consists of 320 bikes and 37 stations across Louisville, KY and Jeffersonville IN. LouVelo is operated by CycleHop with PBSC equipment and overseen by Louisville Metro. To access the bikes download Transit App. To learn more about LouVelo visit www.Louvelo.com. Matthew Glaser, General Manager; 502-643-0363, matthew.glaser@cyclehop.com