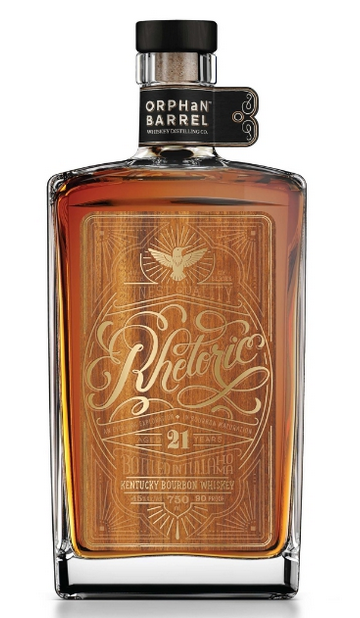 An experiment in maturation, Rhetoric is re-released annually to explore the flavor characteristics imparted by each additional year the bourbon spends in wood, allowing for side-by-side comparisons. Aged in charred American oak barrels for one year longer than last year’s 20-Year-Old release, this rich, complex bourbon represents an exciting evolution in the progressively aged Rhetoric series. Throughout the process, the base Rhetoric liquid remains unchanged, with progressive aging expected to continue through the release of Rhetoric 25-Year-Old in 2019.

Rhetoric stocks were found at the Stitzel-Weller Distillery in Louisville, Ky. The bourbon was distilled in 1993 at the Bernheim Distillery historically located at 17th and Breckenridge in Louisville, Ky., while owned and operated by United Distillers. Rhetoric 21-Year-Old is hand bottled in Tullahoma, Tenn.

“The progressive aging experiment we’re employing with the Rhetoric series is incredibly unique,” said Ewan Morgan, Master of Whiskey for DIAGEO. “We’re going to be able to compare a line of bourbons side-by-side to see how aspects of the liquid – color, aroma, flavors and mouthfeel – are impacted by extra time spent in the barrel. Like many others, I’m looking forward to tasting what one extra year in the barrel does to these bourbons over the coming years.”

Compared to last year’s release, Rhetoric 21-Year-Old is richer and more complex, with a fuller mouthfeel and slightly higher proof of 90.2 (45.1% ABV). Aromas of cherry, sweet tobacco, honey and leather build upon the oak, fruit, vanilla and caramel of Rhetoric 20-Year-Old. New tasting notes of sweet tobacco, dark chocolate, baking spices and honey complement the charred wood, caramel, vanilla and black pepper spice of Rhetoric 20-Year-Old. Rhetoric 21-Year-Old will be available nationwide in allocated quantities for a suggested retail price of $100 for a 750 mL bottle.

The packaging for Rhetoric features a wood-grain label with gold accents, elaborate typography and imagery of a hummingbird. The background, reminiscent of the oak barrels in which the whiskey has aged, will become darker as each new, more mature offering is released.

Like the other Orphan Barrel whiskeys, Rhetoric 21-Year-Old has long awaited a place to call home and should be sipped slowly and responsibly.

The Orphan Barrel Whiskey Distilling Company is an endeavor to rescue long forgotten barrels of delicious whiskey and share them with others. We are inspired by creativity, delicious whiskey, good times and great stories. The project is owned and run by DIAGEO and headquartered in Tullahoma, Tenn.However, we like to think the project is founded in dark, quiet corners of rickhouses around the world where great whiskeys were forgotten, just waiting to be discovered.

DIAGEO is a global company, with its products sold in more than 180 countries around the world. The company is listed on both the New York Stock Exchange (DEO) and the London Stock Exchange (DGE). For more information about DIAGEO, its people, brands, and performance, visit us at www.diageo.com. For our global resource that promotes responsible drinking through the sharing of best practice tools, information and initiatives, visit DRINKiQ.com.