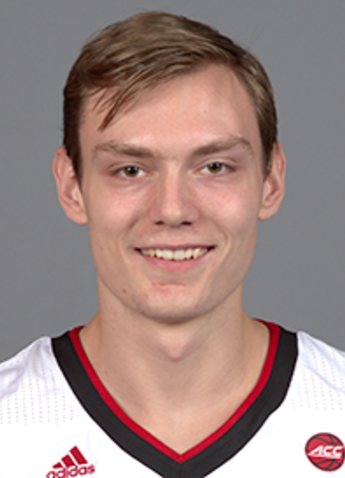 LOUISVILLE, Ky. — University of Louisville junior center Matz Stockman will transfer to the University of Minnesota at the conclusion of the spring semester.  Stockman will sit out the 2017-18 season as a transfer before playing his final collegiate season the following year.
“I’ve had a great time at Louisville the last three years,” said Stockman.  “I’ve learned a lot, gotten to know a great many people and have become very close with our coaches and players.  I’m incredibly grateful for my time here.  I’ve improved a lot since I first arrived on campus and I will be forever grateful to Coach Pitino, the coaching staff and for everyone involved around our team.  However, I’ve been looking for an opportunity to play quality minutes for a long time now and I think this will be a great situation for me.”

“Matz has been a great team member with our basketball team and we appreciate his efforts,” said UofL Coach Rick Pitino.  “Transferring to Minnesota is a great move for him, as he’ll have an opportunity to make an immediate impact when he becomes eligible to play.”
Stockman participated in 18 games as a junior last season, grabbing a rebound in 11 of those.  In his most extensive action of the season, he averaged 8.0 points and 3.3 rebounds in the three December 2016 games teammate Anas Mahmoud missed with a concussion.  He scored a career-high 10 points at Grand Canyon, finishing the game 3-of-3 from the field and 4-of-5 from the foul line.
Stockman scored in 16 of his 23 appearances as a sophomore.  He was one of four players on the Cardinals’ roster this season with international ties.  A native of Oslo, Norway, Stockman (first name is pronounced Motts) attended and played basketball at the Canarias Basketball Academy in Gran Canaria in Spain’s Canary Islands during the 2013-14 season.
This information may be found online at this link:  http://uofl.me/2p3D4Sk