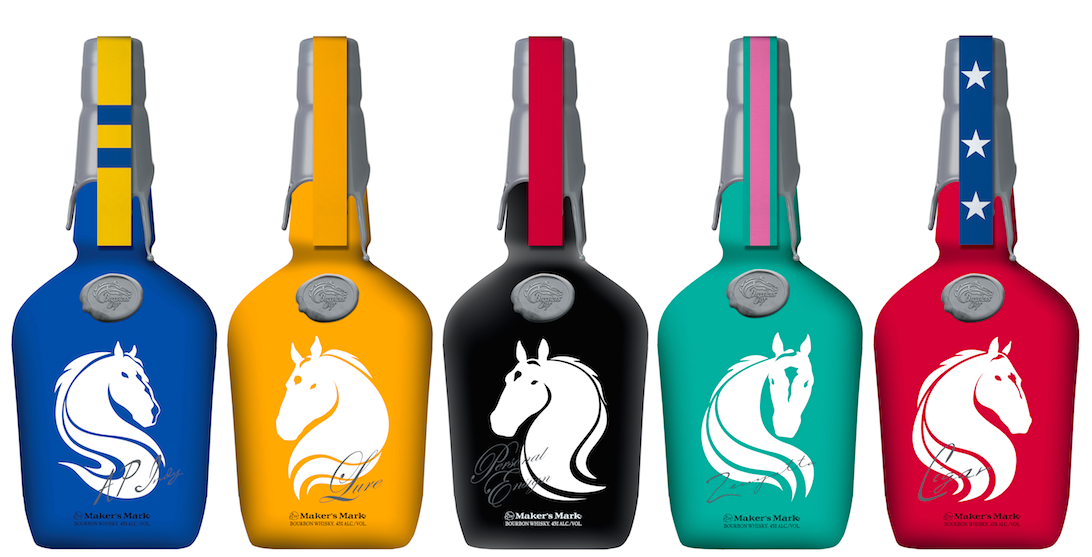 LEXINGTON – The Breeders’ Cup, Thoroughbred racing’s most prestigious international event, and Maker’s Mark®, the original premium bourbon, have announced a new partnership that will aim to raise $1 million for charity over the next three years. Beginning with the 32nd Breeders’ Cup World Championships taking place October 30 and 31 at Keeneland Race Course in Lexington, Ky., the two iconic brands will collaborate on a limited-edition collection of Maker’s Mark bottles, each of which will feature a previous Breeders’ Cup champion. The proceeds from these bottles will be donated to various local and thoroughbred-industry charities through Breeders’ Cup Charities, the official charity outreach program of Breeders’ Cup. In addition to the special bottles being created, Maker’s Mark will also be featured in a signature cocktail at the racecourse and for all of the major Breeders’ Cup parties and hospitality events throughout the week, including Taste of the World and the Finish Line Celebration Party.

“We couldn’t be more excited about this partnership with Maker’s Mark,” said Craig Fravel, President and CEO of the Breeders’ Cup. “We reached out to Maker’s Mark on the very day we announced this year’s World Championships would be at Keeneland because of the brand’s roots here and the esteem in which Maker’s Mark is held all over the world. That makes them a perfect partner, and it’s a milestone for the Breeders’ Cup, illustrating the evolution of the event.”

The five limited-edition Maker’s Mark bottles will represent AP Indy, Cigar, Lure, Personal Ensign and Zenyatta and be colored in the silks their respective jockeys wore during their illustrious careers. Three of the bottles, AP Indy, Lure and Personal Ensign, will be released this fall, just before the Breeders’ Cup World Championships at a ticketed event held at Keeneland on Thursday, October 29.

The event, titled Champions for Charity, will be held in the VIP Maker’s Mark Bourbon Lounge at Keeneland, an upscale area designed to be the go-to, on-site social locale at the track during the week. Attendees at the event will have the opportunity to bid on the bottles through a silent auction, with 100% of the donations going to the following organizations through Breeders’ Cup Charities: Grayson-Jockey Club Research Foundation, Kentucky Horse Park Foundation, The Lexington Cancer Foundation, Inc.®, The Race for Education, Thoroughbred Aftercare Alliance and University of Kentucky® Markey Cancer Center Foundation.  The fourth bottle featuring Zenyatta will then be released in 2016, and the fifth featuring Cigar in 2017. To further personalize the bottles, connections to the five champions will pre-sign each of their respective bottles. To attend the party with the auction of the Maker’s Mark Breeders’ Cup-themed bottles, please visit www.BreedersCup.com/ChampionsForCharity or contact (859) 514-9428.

“This is a great partnership all around for us,” said Maker’s Mark Chief Operating Officer Rob Samuels. “When my grandparents created Maker’s Mark, Keeneland was their first customer and many of their friends were in the thoroughbred industry. So we’ve always had a soft spot for charities connected with the sport. And what an honor to be part of such a prestigious event as the first Breeders’ Cup ever to take place at Keeneland.”

Beyond the fundraising bottle event and being involved with all the week’s activities, Maker’s Mark will also be promoting the Breeders’ Cup in various off-premise market locations. As part of the multi-year partnership, Maker’s Mark also will be closely involved with the World Championships when it returns to Santa Anita in 2016 and for its debut at Del Mar in 2017.