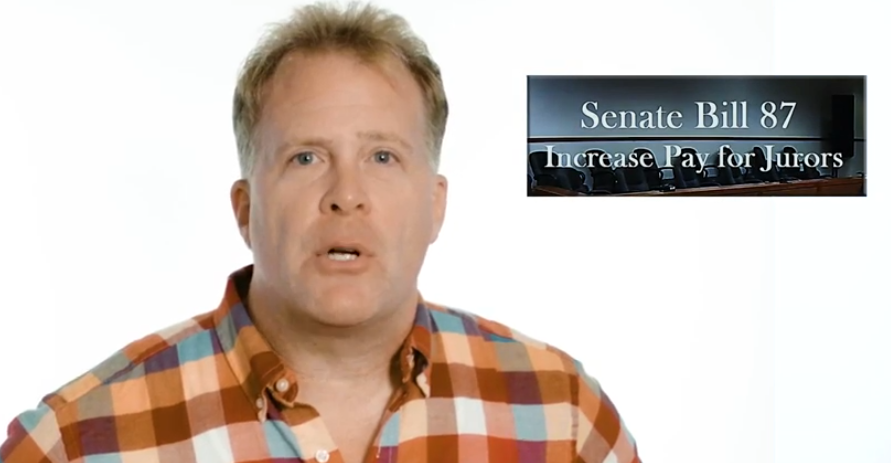 I would like to be excited about fulfilling my civic duty. I’ve been selected for a second time. The first time, six years ago, I wrote about the experience for Insider Louisville, a piece you can read right here.

But the whole jury duty experience suffers from incompetence, inefficiency and people who simply don’t give a shit that you’re giving up time and money to be here, just to keep from being summoned and potentially thrown in jail. I’m sure there are people here who think they’re going to get picked for some exciting case that they won’t be able to tell their friends about, but I doubt it. This isn’t John Cusack in Runaway Jury. It’s bored folks with better things to do in Louisville.

All 200+ people are here because we couldn’t come up with an excuse to get out of it.

Here are some basic complaints —

* When you ask about the free Internet that doesn’t work, I’m told by an official to complain to the Mayor. I’m on my phone’s Internet hotspot, and other jurors keep asking about the Internet access that doesn’t exist. It’s shocking that this is not provided.  Are you listening MAYOR FISCHER?

* There are too many people in the pool, and we’re all stuffed in a single room that is not big enough. I scarfed the only desk space available today, but most everyone else must sit there, in chairs, elbow-to-elbow with someone you don’t know.

* The list of things you can’t do is extensive. And unnecessary.

* Like prison, you can’t leave, or go to the bathroom, or take a walk, without permission. Lunch break is given, but of course, not provided by the cheapskates who run the show here.

* There is absolutely no schedule and you don’t know when you’ll be able to leave.

Below are some excerpts from my piece six years ago — not much has changed. In fact, the pay hasn’t changed since at least 1979. A few years ago my friend Chris Thieneman launched a campaign to raise the pay of jurors — it went nowhere in a legislature where all those voting probably have a way to get out of it.

We’re also not to take it personally when we don’t get picked, a challenge for many potential jurors who desperately want to serve.

The administrators around here are polite, and even encouraged jurors to write to legislators suggesting a pay raise – we get $12.50 a day. Since parking is $6, and lunch is not provided, it’s a losing proposition financially even for those who don’t lose revenue from lost time at work.

The most interesting piece of news – this is the most-trafficked pair of buildings in the state, estimated at 14,000 folks a day passing through security. So there are plenty of rules about what you can and can’t do, where you can go and who to see to get out of jury duty.

But you’re not supposed to ask that question.

Barring a medical condition, you’re here. The only difference between jury duty and prison is that you get to leave the building for lunch.

I’m writing this on Day 2, before any of us have heard from a judge or been selected for Voir Dire, the process of selecting a jury. I know I won’t be picked — I’m in the media, I’m opinionated and I don’t want to be here.