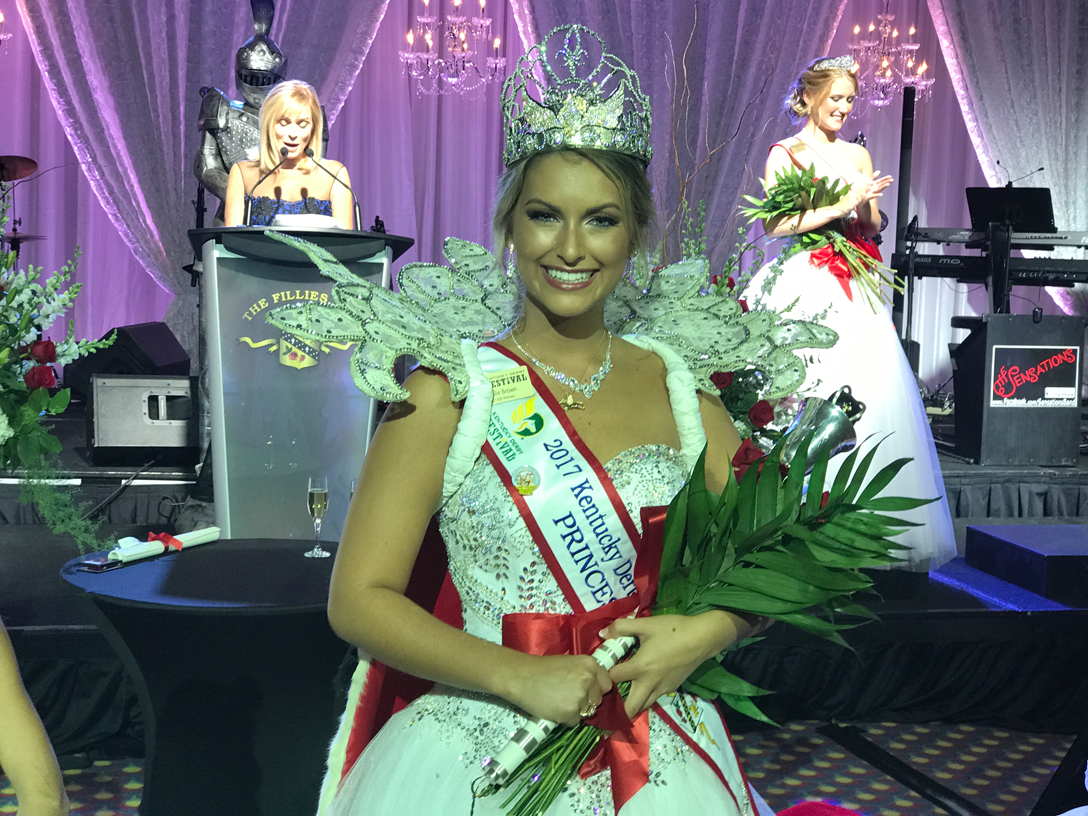 Louisville, KY.  – With the traditional spin of a wheel Natalie Brown of Crestwood, KY, was named the 2017 Kentucky Derby Festival Queen tonight at the 59thannual Fillies Derby Ball at the Louisville Marriott Downtown. Natalie, 21-years-old, is a Senior at the University of Louisville majoring in Communications. She is a Trustees Scholar, Honors Scholar, on the Student Orientation Staff and serves as a Cardinal Ambassador. Natalie hosts a Student News Show at UofL and also volunteers for Heuser Hearing Institute with the Delta Zeta Sorority.

The members of the Royal Court have been representing the Festival at a variety of events since their selection in January, including Festival Unveiled, the Ford Motor Company Spelling Bee and Macy’s Derby Festival Spring Fashion Show. They were selected as Royal Court members out of more than 130 young women who applied to participate in the program last fall.

Criteria for selection included knowledge of the Derby Festival, poise, intelligence, personality and campus/community involvement. Each woman receives two $1,000 scholarships (one from the Fillies, Inc., and one from the Kentucky Derby Festival Foundation) and an official wardrobe.

The Princesses act as ambassadors for the Derby Festival and the city as they represent the community at a variety of functions. The Fillies, Inc. was established to support the Kentucky Derby Festival. Their mission is to organize the traditional Fillies Derby Ball, coordinate the “Royal Court Program,” produce the “Children’s Tea” event, and publish the Official Derby Festival Program. Membership is limited to 250 ladies of our community.

Past Derby Festival Queens include Martha Layne Collins – Kentucky’s first woman Governor, the late Gail Gorski – the first female pilot for United Airlines and a number of other community leaders. Many say their Derby Festival experience helped them prepare for their future careers.

Since 1956, the Derby Festival has worked to bring the community together in celebration. The Festival is an independent community organization supported by 4,000 volunteers, 400 businesses and civic groups, Pegasus Pin sponsorships and event participation.  It entertains more than 1.5 million people in a two- week period and has a local economic impact of more than $127 million.  This involvement has made the Festival the largest single attended event in Kentucky and one of the leading community celebrations in the world.