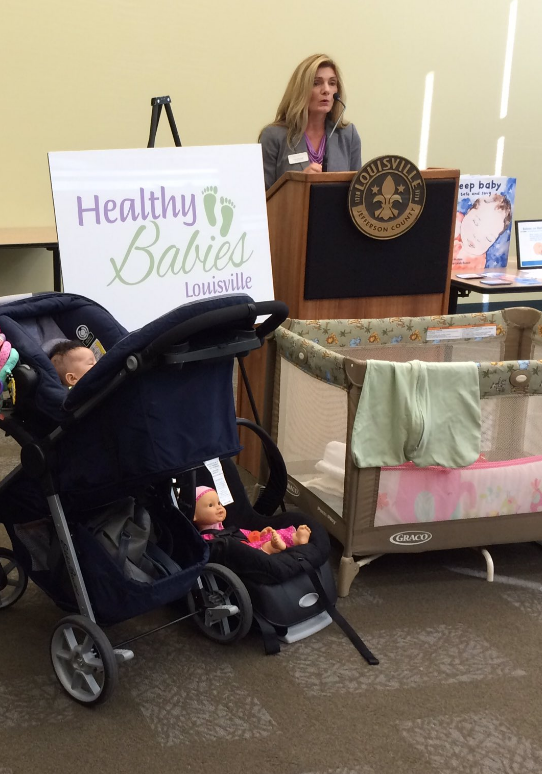 Mayor Greg Fischer: “As a community, we must do everything possible to help all Louisville babies celebrate their first birthday”

“The path to a successful career and a fulfilling life starts before children take their first steps,” the Mayor said.  “That’s why we have to focus on what happens at the early stages and do all we can to help more babies get and stay healthy,”

Dr. Sarah Moyer, Medical Director of the Department of Public Health and Wellness and herself a mother to a new four-month-old son and twin 2 ½- -year-old boys, said, “While we do not fully understand the cause of many infant deaths, we do know the risk factors that can decrease the chances of a baby celebrating their first birthday.”

Dr. Moyer gave parents several tips for a healthy baby: breast feed your baby; don’t  smoke, neither during pregnancy nor after the birth of the baby, and don’t allow anyone to smoke in the house or near the baby; never shake a baby; and practice the ABCs of safe sleeping.  Dr. Moyer also urged parents to take advantage of the community resources available through the Metro United Way 2-1-1 call center.

Erika Janes of Kosair Children’s Hospital Safe Kids Louisville elaborated on the ABCs of safe sleeping.  Babies should be put to sleep alone, on their backs and in a crib. “Every five days in Kentucky, a baby dies in an unsafe sleep environment, and more than half of these involve babies sharing a bed,” she said.   “A baby in Kentucky is seventy times more likely to die in an unsafe sleep environment than in a car accident.”

Shelton McElroy spoke of the grief his family experienced when an infant nephew suddenly died.  “It made me re-examine much of what I had learned growing up about the best and safest ways that babies should be sleeping,” he said.

Healthy Babies Louisville is a coalition of 13 health and social service institutions that was formed in January.  The coalition’s goals are to lower infant mortality rates; reduce the gap in infant mortality between black and white babies; increase access to prenatal health care; reduce smoking among pregnant women; and decrease teen pregnancies.

Healthy Babies Louisville has accomplished two of its immediate goals.  It has reinstituted the Fetal and Infant Review Board, which investigates the causes of fetal and infant death each quarter.  It has also increased referrals for prenatal and perinatal services through the Metro United Way 2-1-1 call center.

To achieve its goals, Healthy Babies Louisville uses the Collective Impact Framework, which is premised on the belief that no single policy, government department, organization or program can tackle or solve the increasingly complex social problems we face as a society.

The approach calls for multiple organizations or entities from different sectors to work on a common agenda, shared measurement and alignment of effort. Unlike collaboration or partnership, Collective Impact initiatives have centralized infrastructure – known as a backbone organization – with dedicated staff whose role is to help participating organizations shift from acting alone to acting in concert.

For more information on the Healthy Babies Louisville, click here or call 574-8661.