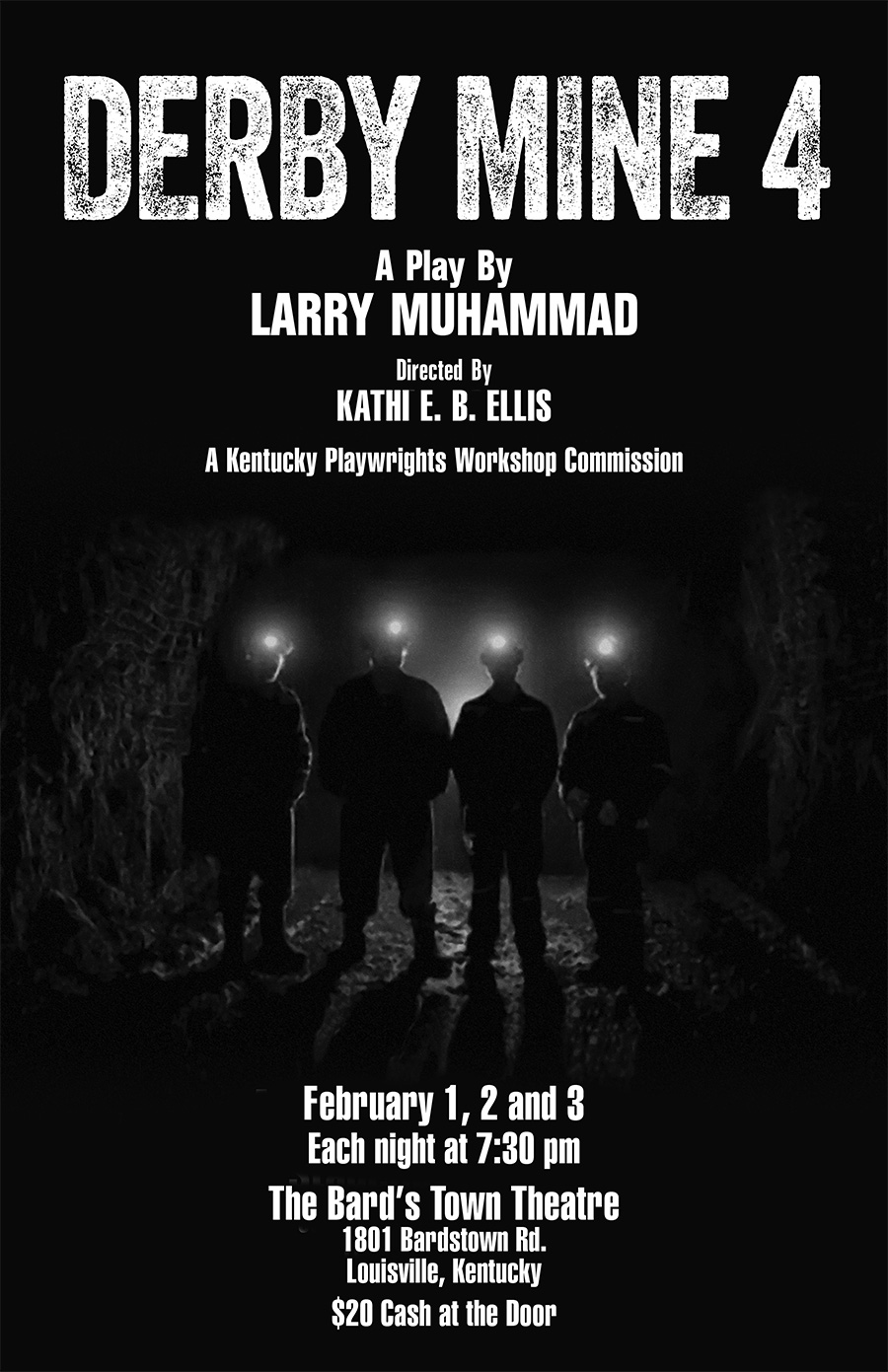 Louisville, KY., – The Bard’s Town Theatre hosts a double bill of African-American themed plays to kick off Black History Month this year – “DOUBLE V”, about a crusading black newsman during World War II who helps persuade President Harry Truman to integrate the US military, and DERBY MINE 4, about an African-American miner, rare in today’s coal industry, who rescues colleagues trapped underground by a methane explosion.

Written by local playwright Larry Muhammad, the two hour-long dramas will be performed at The Bard February 1, 2 and 3, each night at 7:30 pm. They are brought to the stage by a team of seasoned theatre artists, including Kathi E. B. Ellis, co-artist director of Looking for Lilith Theatre Company who helms the DERBY MINE production.
“I worked with Larry as dramaturge helping develop the play and I’m delighted now to direct the full production,” said Ellis, who co-produced and directed the six annual Josephine SummerStage Shakespeare productions in Frankfort.

Commissioned by Kentucky Playwrights Workshop, DERBY MINE 4 reflects on the mining life during the coal industry’s decline. Mining coal is a family tradition for each character in the play, and it addresses safety concerns relevant to the Kentucky Darby LLC mine disaster near Harlan in 2006 that left five miners dead. In the play however miners have survived the blast unhurt and huddle in a safe room devising an escape, playing games and singing to pass the time. But tempers flare as differences inherent in the group’s diversity test the unity they need to survive. Becky (Megan Adair), a white trainee, questions the black team leader’s ability while fending off sexual advances from Dan (Casey Moulton), also white, who suffers early-stage black lung and is annoyed he has to babysit the new hire. Lee (Brian West), the team leader, is painfully conscious of the racism his black predecessors endured in the pits but a company man butting heads with Proctor (Phil Lynch), an older white union organizer blaming management
for the disaster that threatens their lives. Desperate circumstances however make them function as a team, crawling miles together in the dark to avoid rescue drills they fear will cause a further collapse.

West, who has acted for Clarksville Little Theatre, Hayswood Theatre, Savage Rose Classical Theatre and Pandora Productions among others, says “I had the opportunity to do the part of Lee in a staged reading last winter, and now I have the honor of bringing him to life on stage.” West comes from a mining background and says he dedicates his performance to his grandfather, “Leland Trent, a great man and a coal miner.” Anchoring the second hour of theatre is “DOUBLE V”, a World War II newspaper drama given
special relevance today as mainstream media is constantly being attacked by President Trump. The plays is directed by Clyde Tyrone Harper and stars Alphaeus Green, Jr., as a crusading black publisher who overcomes FBI pressure, desertion of advertisers and hate mail from bigots as he exposes racism in the US military.

Green has acted for Center Stage, Kentucky Shakespeare, Rush Trowel Entertainment and Smoked Apple Theatre Group and said, “I’ve recently been focused on screen work in films and developing my improv troupe Tenuous Reality. So I’m thrilled, especially as a Louisville native, to return to the stage in this particular play.” Green portrays the late Louisville Defender publisher Frank Stanley, Sr. (Frank). He is aggressively competitive with the flagship of his newspaper’s chain, the mighty Chicago 2 Defender, and personally jealous of its owner, John H.H. Sengstacke. So happens that Stanley is elected president of the Negro Newspaper Publishers Association when black newsmen launch the successful “Double V” campaign, linking victory against Hitler overseas to victory against racism at home. This wins him a government-sponsored press inspection of troop segregation in occupied Europe, and the official report he writes helps persuade President Harry Truman to integrate the military.

Harper, the director, has worked with Ruben Santiago Hudson, Ella Joyce, Emilio Estevez and other industry standouts and says, “I’ve always wanted to direct one of Larry’s plays and I’m glad it’s ‘Double V’.” Other cast members are Marcus Fisher as Defender editor and Stanley second banana (Nate), Stacey Hopson as former schoolteacher and office secretary (Mildred), and Jeff McQueen as (Agent) from the FBI accusing Stanley of sedition.