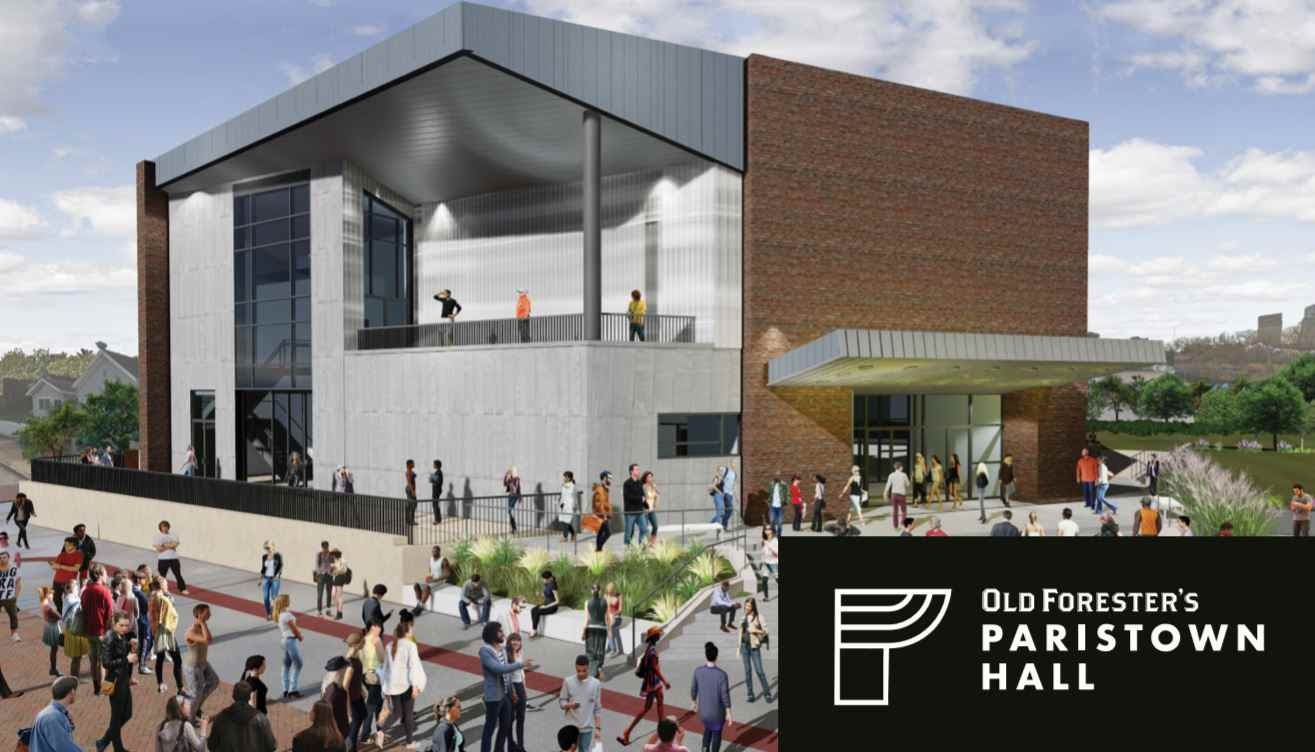 LOUISVILLE, Ky. — The Kentucky Center joined with Old Forester today to announce the name of its newest venue – Old Forester’s Paristown Hall – a standing-room performance venue located between Vine and Brent Streets in the east downtown area. The new venue, opening this summer, reflects the two organizations’ hometown connection. In addition, The Kentucky Center announced a formal programming arrangement with Production Simple, a Louisville-based talent-buying and promotion company.
The Old Forester’s Paristown Hall name is designed to celebrate our hometown and this historic neighborhood bound by Broadway, Barrett Avenue, Vine and Brent Streets. Old Forester’s Paristown Hall will be a general admission venue for national touring bands, collaborative projects, new works and non-traditional arts experiences. The $12 million, 28,000 square foot building will accommodate up to 2,000 patrons for shows and events. The venue will also produce and host new community and neighborhood events, including festivals and family-friendly gatherings, as well as fundraisers, conventions, programs and performance opportunities for local favorites. Old Forester will serve as the venue’s title sponsor.

“Old Forester’s Paristown Hall now joins our esteemed campus of venues that include The Kentucky Center and The Brown Theatre,” said Kim Baker, president and CEO of The Kentucky Center. “This is the next step in fulfilling our facility strategy to attract world-class artists to Louisville, by meeting a niche need in the performance venue space – appealing to a fast-growing demographic, and cementing our position as a regional economic engine.”

“Old Forester – the First Bottled Bourbon – is proudly Louisville’s hometown bourbon – distilled, matured and bottled exclusively here in our city,” said Campbell Brown, president and managing director of Old Forester and great-great grandson of founder George Garvin Brown. “We are excited to partner with a truly local arts organization that for 35 years has been bringing world-class entertainment to Kentucky. Old Forester’s Paristown Hall is a community investment that further demonstrates our mission of enriching the quality of life here in our hometown.”

The Kentucky Center, a longtime engine for economic development, tourism and talent attraction, sees Old Forester’s Paristown Hall as an opportunity to cultivate an audience of potential lifelong supporters of the arts and culture in Louisville. Old Forester’s title sponsorship reflects its continued commitment to Louisville, in addition to its downtown distillery and homeplace experience on Whiskey Row, sponsorship of Thurby at Churchill Downs during Derby Week and serving as the official Mint Julep of The Kentucky Derby. From Old Forester’s home on historic Whiskey Row, to Old Forester’s Paristown Hall, and everything in between, the First Bottled Bourbon reminds arts patrons to please drink responsibly.

ABOUT OLD FORESTER: Old Forester is Brown-Forman’s founding brand, founded in 1870 by George Garvin Brown. Brown believed Old Forester was so pure and consistent that he sealed it, signed it, and pledged, “There is nothing better in the market.”

ABOUT PRODUCTION SIMPLE: Launched in 2005 by partners Joe Argabrite III, John Grantz, Lizi Hagan, and Billy Hardison, Production Simple is a boutique talent-buying, promotion company based in Louisville, KY. Since its inception the ProSim team has worked with Louisville’s premiere venues, including The Kentucky Center, Iroquois Amphitheater, The Louisville Palace and Waterfront Park as well as regionally in New Albany, Lexington, Covington and Cincinnati. 2019 will bring change to the company as they are expanding their team and becoming the exclusive buyers for both Headliners Music Hall and Louisville’s newest venue, Paristown Hall.