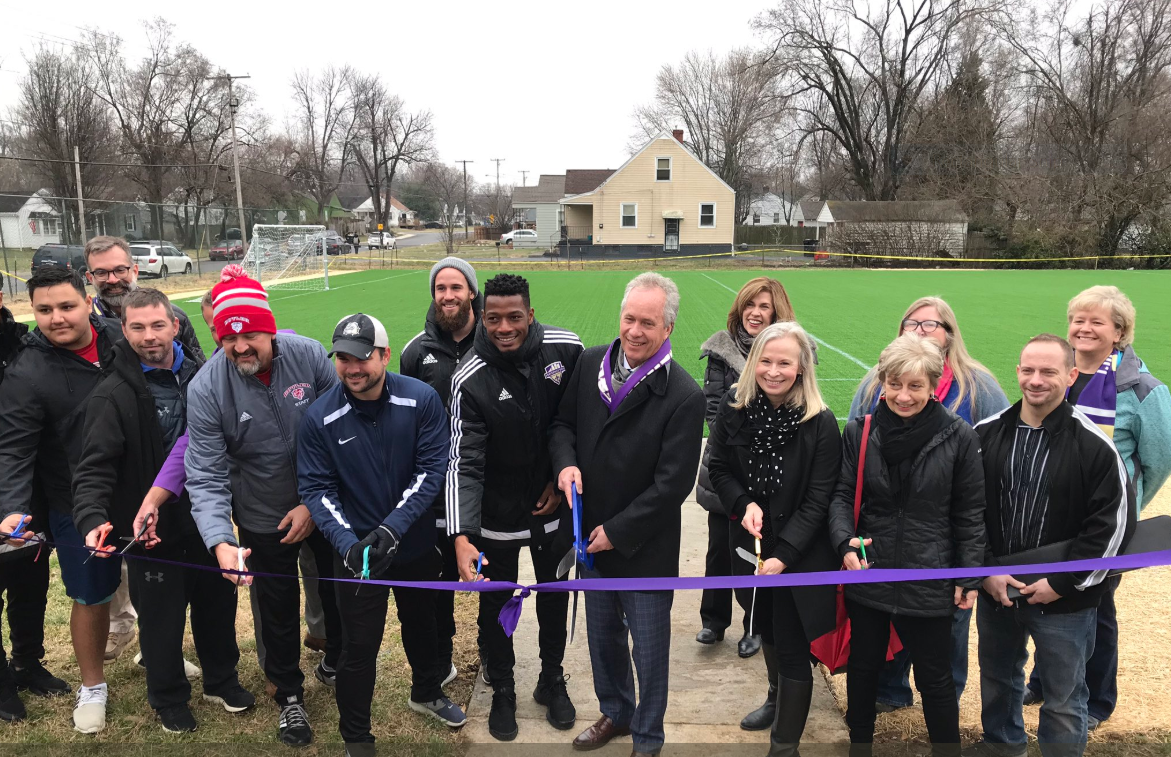 The 125’ x 225’ field is designed for 7-a-side play, larger than the 5-a-side field the Foundation installed last summer at Beechmont.

“Working with various partners in the community to create new amenities and support for our public parks, is what we, as a foundation, are all about,” said Louisville Parks Foundation CEO, Brooke Pardue. “This is the second field in our South Louisville Soccer Field Project, which means we’ll be coming for Wyandotte Park next!”

“More now than ever, as a community we’re depending on the work of non-profits like the Louisville Parks Foundation and the generosity of those who support them to help move this community forward with investments like the South Louisville Soccer Project,” Mayor Greg Fischer said. “I’m looking forward to seeing this field and others full of competitors of all ages enjoying the game of soccer.”

“We strongly believe soccer is a sport for everyone,” said Mario Sanchez, Louisville City FC’s Director of Youth Development and Community Relations. “Helping launch new opportunities for our city to experience the joy of playing soccer fits perfectly into our mission at Louisville City. We look forward to seeing these new fields filled with local soccer players.”

Donations are still be accepted for Wyandotte Park, where (3) 5-a-side fields are planned for construction in Summer 2019.
About the Louisville Parks Foundation:
The Louisville Parks Foundation (LPF)’s mission is to inspire donors to invest in our 120+ public parks and recreational facilities – for present and future generations. LPF was formed as a non-profit in December 2005 to support parks and community programs not funded by other local non-profits. In 2013, the Louisville Jack O’Lantern Spectacular opened and the producers of the show partnered with the Louisville Parks Foundation, which became the recipient of the proceeds. Since then, the Foundation has completed major projects in California, Lannan, and Russell Lee parks, installed a 5-a-side turf soccer field at Beechmont and built the first “Skate Spot” in the Midwest at Breslin Park. The Foundation is currently raising funds for its final phase of additional turf soccer fields in South Louisville. For more information, visit www.lpfky.org.
About Louisville Parks and Recreation:
Louisville Parks and Recreation, a nationally accredited parks and recreation agency, manages 120 parks, 18 of which are Olmsted-designed, on more than 13,000 acres of land. Louisville Parks and Recreation also operates numerous youth and adult recreation programs and facilities, two historic homes, 10 golf courses, two arts and cultural centers, an outdoor performing arts theatre and two nationally-recognized skate parks. Its mission is accomplished by taking care of all parks properties and creating new ones, by providing safe and diverse recreational programs, and by protecting our public lands and resources for future generations. www.bestparksever.com