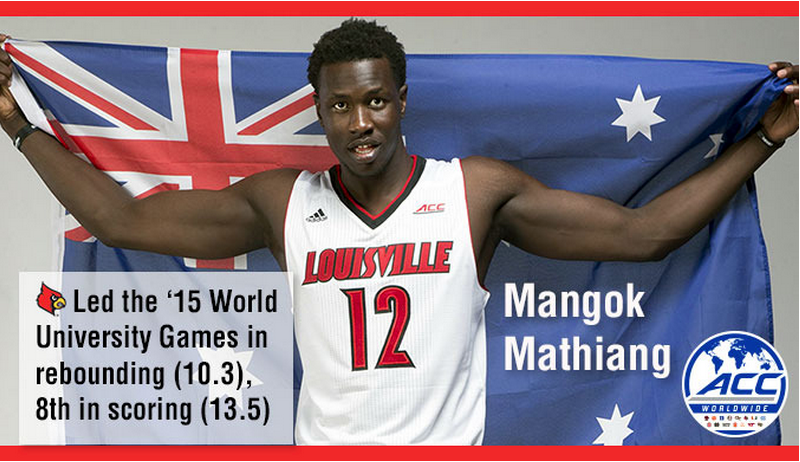 GWANGJU, South Korea — University of Louisville forward/center Mangok Mathiang completed his participation with his Australian team in the 2015 World University Games on Monday as Australia (5-3) finished 10th in the international event.
Mathiang led the 23-team event in rebounding and finished tied for eighth in scoring, producing five double-doubles.  He started all eight games for Australia, averaging 13.5 points and 10.3 rebounds while shooting 56.1 percent from the field (46-of-82, fourth-best in the World University Games) and adding seven blocked shots.  His top scoring effort was 23 points against Chinese Taipei and his best rebounding game was 17 against the home nation Korea.
Mathiang totaled 16 points, 11 rebounds and three blocked shots as Australia fell 81-72 to Serbia in its final game of the event on Monday.  Australia’s 10th place finish was its second-best possible finish after missing the medal round after emerging as the No. 3 team out of Pool C.  The USA won the gold medal with an 84-77 double-overtime victory over Germany.
Mathiang was born in Sudan, Africa, but lived in Melbourne, Australia before moving to the United States in 2010 to attend prep school.  Last season at Louisville, he started all four of the Cardinals’ NCAA Tournament games and helped UofL post a 27-9 record, reaching the NCAA  Elite Eight for the fifth time in the last eight years. An All-ACC Academic team selection, Mathiang averaged 2.6 points, 4.7 rebounds and was sixth in the ACC with 46 blocked shots last season. The Cardinals’ 2015-16 team co-captain and a rising junior, he hit the game-winning jumper with 2.7 seconds remaining in Louisville’s 59-57 victory over No. 2 Virginia in the regular season finale.
Former Cardinal Luke Hancock had been the last UofL player to participate in the World University Games, averaging 10.8 points and 3.0 rebounds for the USA squad in the 2013 games played in Kazan, Russia.
Mathiang’s participation is also part of the ACC Worldwide initiative that seeks to further the conference’s member institutions internationally through promotion, marketing and athletic competition.