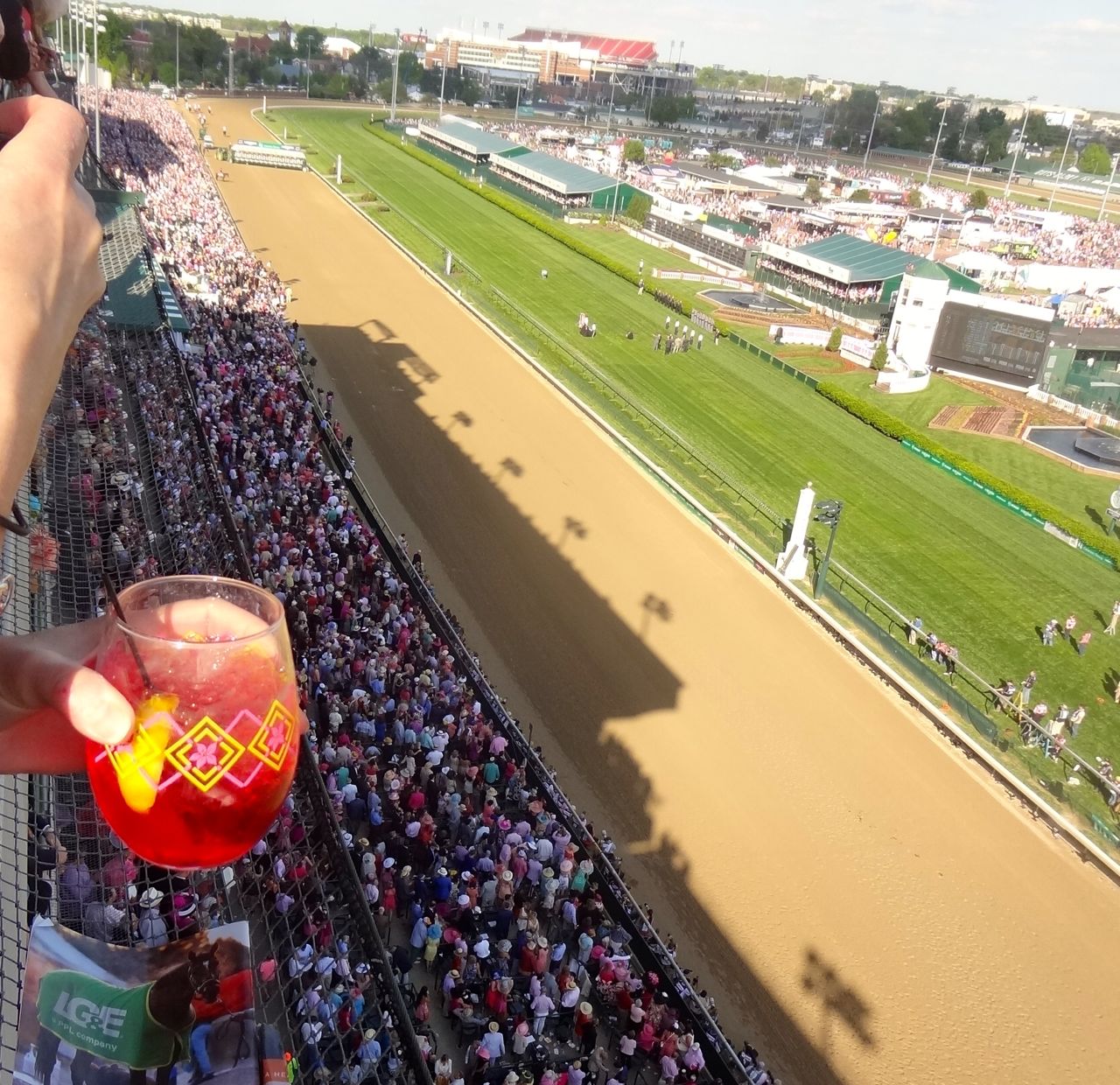 Postponing the race was tough decision, but the right one

LOUISVILLE, Ky. (May 1, 2020) – Mayor Greg Fischer today encouraged all Louisvillians to celebrate the enduring spirit of the Kentucky Derby as we all continue to stay home and practice safe social distancing during what would have been the 146th running of the storied race.

The Run for the Roses has been tentatively postponed until September 5 as a precaution against the spread of the COVID-19 virus. It is the first time since 1945, during World War II, that authorities have pushed the Derby off the first Saturday in May.

“Postponing Derby was a tough decision, but it was obviously the right call for the health and safety of the people of Louisville and the people who come to visit our city,” Mayor Fischer said. “The coronavirus thrives in the kind of crowds we see every year at Churchill Downs as over 160,000 people gather to watch the greatest two minutes in sports.”

Mayor Fischer acknowledged that postponing the race doesn’t just affect the thousands of people who would have attended the race. It also means no backyard parties, family gatherings, or festive bars and restaurants, either.

“And even though we’ve had success minimizing the spread of the virus, we cannot lose focus. We cannot let our guard down, even for one beautiful weekend,” the Mayor said. “Because this virus doesn’t care about our traditions. It only wants to infect as many people as possible.”

Mayor Fischer was joined at his media briefing today by Kevin Flanery, president of Churchill Downs Racetrack, who shared details about “Kentucky Derby At Home,” a virtual party on Saturday that offers everyone a chance to enjoy some Derby traditions as they wait for the real race to return.

“As the traditional first Saturday in May started to draw closer, we felt a desire and a responsibility to create an opportunity for the community and our fans to honor that day in a meaningful way. The Kentucky Derby has a way of bringing people together and we hope this will unite us at a time when we need it the most,” Flanery said.

“Kentucky Derby At Home” will include interactive activities online throughout the day and The Kentucky Derby: Triple Crown Showdown, a virtual race featuring 13 past winners of the Triple Crown. The computer-simulated race was created by Inspired Entertainment and will appear just like a race would at Churchill Downs Racetrack.

Racing fans can go online at www.KentuckyDerby.com to choose their race favorite and make a donation to COVID-19 relief efforts, with Churchill Downs pledging to match those donations up to $1 million. Flanery added that participants who pick the winner of the The Kentucky Derby: Triple Crown Showdown will be eligible to win an Ultimate Kentucky Derby VIP experience in September.

TV coverage of tomorrow’s virtual Derby Day will begin at 11:30 a.m. on NBC (WAVE3) and will culminate with a rebroadcast of the thrilling 2015 race, in which American Pharoah began his eventual Triple Crown-winning journey. Other local media outlets like the Courier Journal and WHAS 840-AM will also feature a variety of virtual events, and there will be a collective singalong of “My Old Kentucky Home.”

“The folks at Churchill Downs have come up with some creative options for Derby fans who might want to put on a fancy hat, enjoy a mint julep and have a good time at home,” Mayor Fischer said.

Meanwhile, live racing is slated to resume at Churchill Downs on May 11, albeit without fans in attendance. The Mayor cautioned that the decision to reschedule the 146th Kentucky Derby on Labor Day weekend is tentative and depends on whether health officials believe it is safe.

“People are wondering what we can expect for Derby in September. Obviously, it’s the data and the health experts that will determine that for sure,” Mayor Fischer said. “And four months is a long time in the cycle of this COVID-19 crisis. To put it in racing terms, we’re barely around the first turn in this process, so we have to see how it unfolds.”

Mayor Fischer today also announced that he’s extending the city’s COVID-19 state of emergency until June 1. First issued on March 13, the order was initially extended to May 10, but the Mayor said another extension is warranted.

As a result of the extended state of emergency, the Subway Fresh Fit Hike, Bike & Paddle, normally held on Memorial Day, has also been canceled.

Although the community has made great progress in slowing the spread of coronavirus and has thus far averted an overwhelming surge of patients at local hospitals, Mayor Fischer warned that we are still very much in the throes a pandemic.

“While we’re making progress in this fight, we still have a long way to go. We have to stay focused and vigilant,” the Mayor said. “I know that’s all disappointing. But I appreciate the cooperation and patience of our citizens and residents as we work together as a community to save lives and prevent the spread of COVID-19.”

Currently, 47 members of LMPD, Louisville Fire, Metro EMS, Metro Corrections and the Sheriff’s Office are off-duty due to COVID-19:

Metro Corrections inmate data for May 1:

Health experts say that much more testing will be needed for Louisville to demonstrate that it can safely reopen its economy and begin easing restrictions that are compelling us to stay home and avoid gatherings.

“The more quickly we can scale our testing capacity, the more quickly we can start to rebuild and recreate our economy. As I said, we are making progress. We’re flattening the curve. And one of the many things that makes me more hopeful about our progress and our future is the expansion of testing that’s happening in our city,” the Mayor said. “It’s great to see more and more people having the opportunity to get tested.”

In addition to the testing sites at Walmart and the Louisville Urban League, another mobile testing site has been established at Shawnee Park. The Walmart site focuses on testing health care workers, first responders and people who are showing symptoms that align with COVID-19, while the other two sites are open to the public on an appointment basis.

Mayor Fischer said the city is also working to make COVID-19 testing more available to African American residents, who have been hit in disproportionate numbers by the virus here and elsewhere in the country.

The city has partnered with the University of Louisville, Family Health Centers and Park DuValle Community Health Center to ensure African Americans here have access to more testing. The Hope Wellness Center on West Broadway is also working to provide more testing.

“We will continue to work to make testing more available city-wide and especially in under-resourced neighborhoods and in our African-American community,” Mayor Fischer said. “We do that because it’s the right thing to do. This is about more than health. This is about justice. And one other very practical thing: With a deadly, highly contagious disease like COVID-19 if any of us are infected, none of us are safe.”

“These shields will protect our frontline warriors as they continue to fight his dastardly disease,” the Mayor said. “Thanks, and go Cards!”

Although local hospitals and first responders have managed to maintain an adequate supply of personal protective equipment (PPE) such as masks, gloves, and shields, more is always needed. If you or your organization has the capacity to donate or produce PPE, please contact Louisville Metro Government at covid19resources@louisvilleky.gov.

“The Doctor is In” on Saturday’s tele town hall

Mayor Fischer will again be joined by Dr. Jon Klein on his tele town hall Saturday morning. Dr. Klein, the vice-dean for research at the UofL School of Medicine, will answer your medical questions about the COVID-19 pandemic.

To participate, go to www.facebook.com/MayorGregFischer at 10 a.m. on Saturday.