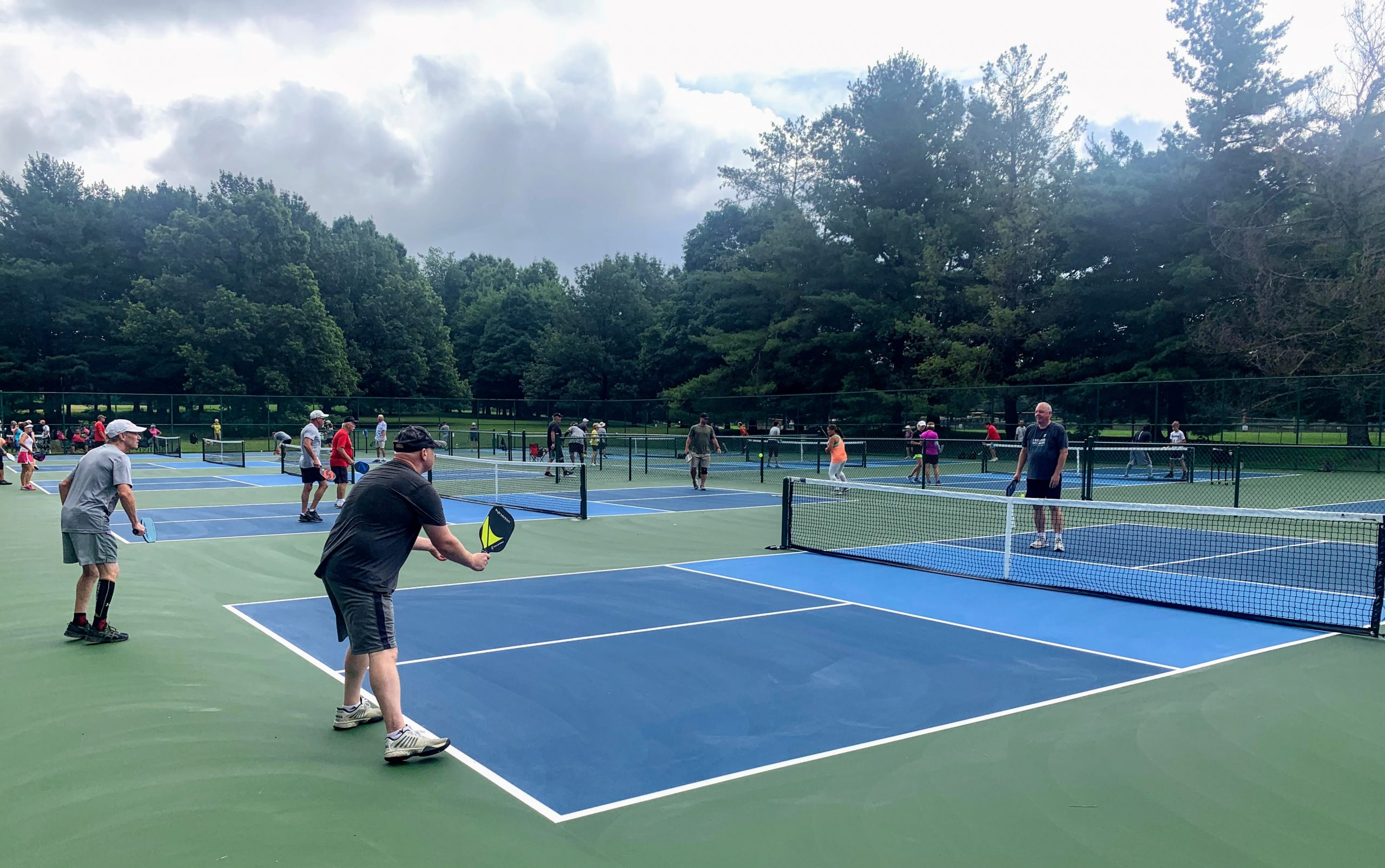 If the game of pickle ball were a contagious disease, Louisville would be in the midst of an epidemic.

All across the city, people are finding new places to play the country’s fastest-growing sport. And they’re flocking to them.

In July, 16 new public courts replaced tennis courts at E.P. “Tom” Sawyer Park in eastern Jefferson County, attracting dozens of players at all daylight hours. At peak times, the facility is packed with players, four to a court, with more people waiting their turn.

The steady growth of pickleball at Metro Parks will culminate next spring with the addition of at least 20 new courts, including a dozen at Charlie Vettiner Park in Jeffersontown. With additional courts coming to Petersburg Park, Highview and McNeely Lake, Metro Parks will have doubled its outdoor courts to nearly 40 in a single year.

So what’s driving the number of players and facilities to this amazing level of activity? A study by the Sport and Fitness industry Association revealed that the game’s participation grew by 7 percent in the five years leading up to 2019, while the overall activity level was flat. It prompted The Economist to call it “the fastest-growing sport in America.”

“No matter what your athletic ability is, no matter if you’re an athlete or never played a sport in your life, we can put a paddle in your hand, and in about 20 minutes you’re going to be dinking this little ball over this 34-inch net, and you’re gonna have a smile on your face, and you’re gonna go home and your legs are gonna hurt,” said Steve Hocker, a local teacher and enthusiast.

The game is simple to learn. Anyone who’s ever tried ping pong or tennis can catch on within a few minutes on the court. While it’s athletic, it doesn’t require the foot speed or athletic ability required for tennis, or racquetball. And while you’ll see players in all age groups, it’s a game a lot of older individuals have adopted.

The 16 courts at Sawyer Park are expected to be an economic boom for the city, and is likely part of the reason state government, led by Rep. Adams, appropriated about $100,000 to build it.

“There are studies on the economic impact of 16 courts,” said Hocker, who added that it’s likely Sawyer will host up to five major tournaments a year. “Tournaments can have a major impact for the area. It all adds up. The national average spent by players at tournaments is $39 per player per day.”

Nick Price, the Sawyer park manager, said the game has been played – indoors – at the park for 30 years. The movement to build outdoor courts began in 2015, he said, when the park’s foundation began to work toward raising the funding.

“We wanted to reclaim our position in the city as the best-known place to play,” he said. “I think people appreciate it, that some can just walk up and get in a game.”

Keith Johnson is the creator and manager of the Derby City Pickleball site on Facebook, which grew from nothing to more than 1,000 members in a year.  “It’s just exploded. We haven’t advertised or sought out players,” he said. “You can just step into games with people you don’t know, and you make friends.”

After the Sawyer Park complex opened in July, park officials decided to sponsor a league on Friday nights, hoping to attract 30 players. After a big response the league expanded to 50 players, but many who wanted to play were left out. Signs advertising leagues, tournaments and new locations at churches and community centers around the city have popped up at every local court.

Not to be outdone, Metro Parks is promoting new courts throughout the city. Jason Canuel, Assistant Director of Engineering and Planning for Metro Parks, said plans for the 12-court complex at Charlie Vettiner Park, which will replace five tennis courts, were underway at the same time as the Sawyer Park expansion.

Canuel said that Metro Council members Kevin Kramer, Robin Engel and Stuart Benson helped provide financing for the $275,000 to build them, and they’ll be ready in spring 2022.

In addition, Canuel said that up to eight courts will be built at Petersburg Park in Newburg for next spring. And projects backed by Councilman James Peden will bring new court projects at Highview Park and McNeely Lake Park.

He said the Parks began building courts a decade ago by putting single courts at Sun Valley, Riverside Gardens and Pee Wee Park. However, it wasn’t long before it got feedback that indicated players wanted more than one court at a location. So gradually the courts got built — 3 at Des Pres Park in 2017, 6 at Wyandotte Park in 2018, 2 at Charlie Vettiner in 2019 and 3 at Hounz Lane in 2020.

At these Metro Parks facilities, there are games going on morning and evening with regulars, who welcome new players. Some are more organized. A group at Charlie Vettiner communicates with each other through the app WhatsApp.

By 9 a.m. most mornings, the three courts at Hounz Lane are full, with players putting their paddles in a box, the equivalent of yelling “I got Next” as they wait their turn.

And because all you need for a court is a net and lines, plenty of driveways and patches of concrete at homes are being used as homemade courts. Buying a portable net and painting lines can be accomplished for less than $400. Paddles range in cost from under $50 to $200.

According to legend, the game was invented in 1965 by some fathers that wanted to keep their kids busy. Pickle was the name of the family dog. From there, the game has grown dramatically and has national tournaments. While the game seems simple, there are plenty of professional instructors and enthusiastic students.