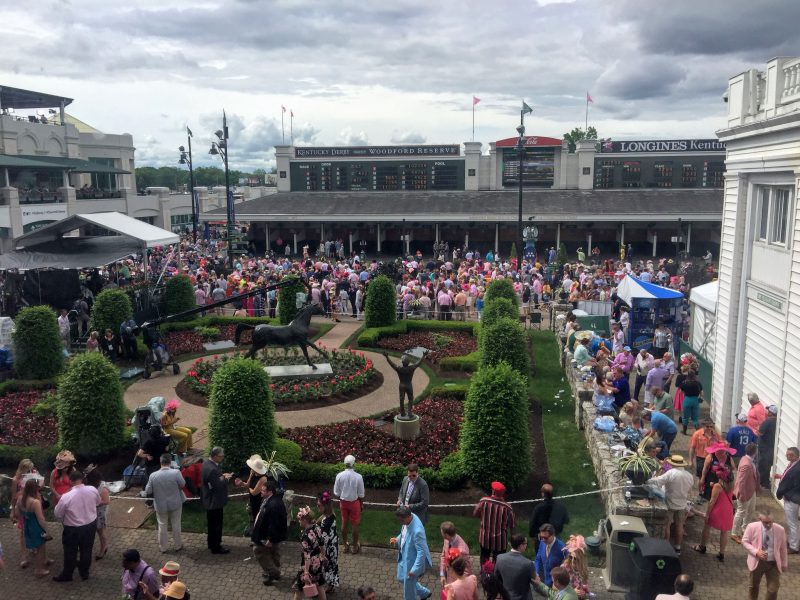 NOTE: Just for fun, I dug up this column I wrote for the Voice-Tribune before the 2012 Derby.

One of the best things about the Kentucky Derby is the fact that it’s a delicacy that can be consumed in a thousand different ways. It’s an event with universal appeal that leaves a lasting impression, whether you’re having a backyard party or mixing with celebrities on Millionaire’s Row.

I’ve been fortunate that, in the 51 Derbies during my lifetime, I’ve seen about every square foot of the track on Derby Day. I’ve been there for more than a dozen of them — as a busboy, infield reveler, reporter and irresponsible parent. My memory, of course, is a little hazy because of all the alcohol, but one thing you always remember about the Derby– your first.

Everyone remembers the winner’s name from his or her first Derby. Mine was Affirmed in 1978, and it’s amazing that I know I bought a beer in the infield for a dollar. I still have a poem I wrote about the experience for Mrs. Stapp’s English class at Iroquois High. There were plenty of creative schemes and near nudity to get alcohol onto the track. Churchill Downs was less corporate then, and the infield had less concrete.  So it was more fun.

I came by my interest in the race honestly. My dad was a pari-mutuel clerk who worked the $2 Place window back in a time wh 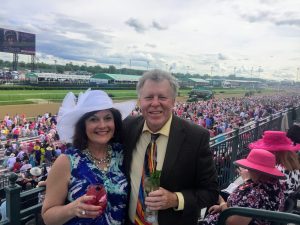 en if you wanted to place different types of bets, you went to different betting windows. The first time I stepped foot on Central Avenue was when my dad took me there to get his credentials. I was about 5.

Dust Commander was the first Derby winner I remember. It was 1970. I used to spend hours reading the programs Dad brought home and eventually memorized all the Derby winners. I had the same ability to recall the names that Jack Conway famously boasted about during a political campaign. I’d ask friends to pick a year, looking at a Derby glass, and amaze them by coming up with the name, e.g. 1960 would be Venetian Way.

Post-2012 (I’ll Have Another), I’ve spent Derbies roaming the paddock, backside and grandstands with Paula, even as Country House won in a disputed finish last year.

The two years I spent as a busboy on Millionaire’s Row (Spectacular Bid and Genuine Risk) opened my eyes to the economics of the Derby, mainly because I couldn’t believe how much people paid for a plate of shrimp up there.  My mom by then was working for the caterer Harry M. Stevens, and got me a job, too.

For the next eight years, Pleasant Colony through Winning Colors, I made it an annual tradition to bring fraternity brothers and girlfriends home from college and beyond to experience the Derby infield.  We always placed bets, and someone in our group would pick a winner. At racetime, we’d wander over to the fence and see a few seconds of the race. I famously had Gato Del Sol and Spend a Buck, always placing an extravagant $10 win ticket on one Horse. I imagined my infield streak would go on forever, but in 1989 (Sunday Silence) I couldn’t get home from North Carolina. It was just as well, as the day’s weather in Louisville was cold and wet.

Now, if you go out of town for Derby Day, don’t expect the natives to share your enthusiasm. I’ve been outside the city twice. In 1998, I was in Hawaii and frustrated when the bartender at the sports bar refused to turn the TV from a meaningless Utah Jazz playoff game to Louisville until just before “My Old Kentucky Home” was played. The place and the winner was Real Quiet.

I was mixing with millionaires in 1997 (Silver Charm) when I covered the track as a Business First reporter. I remember being pushed and shoved near the elevator trying to get close to Al Gore.

In 2005, I learned that if you bought a general admission ticket, you could go over by the first turn and get right on the rail. This was a great vantage point because all of the connections to the Horses walked by there on the way to the paddock from the backside. (It’s too bad the Downs has since put concrete and boxes there.) It was family-friendly, so I took the kids. When my then 7-year-old son Luke insisted he wanted a bet on his favorite number 10, of course I told him I wasn’t wasting money on a Horse like Giacomo that didn’t have a chance.

I’ll never live that down. Nor will I forget this story from 1992. While I went to a neighborhood party, I sent a $2 exacta bet with my wife’s favorite numbers, along with my $10 bet on Lil E Tee. The 7-3 exacta paid $854.40, money I’ve been giving back on losing tickets ever since.

The Derby experience, no matter how you do it, will keep you coming back, one way or another.