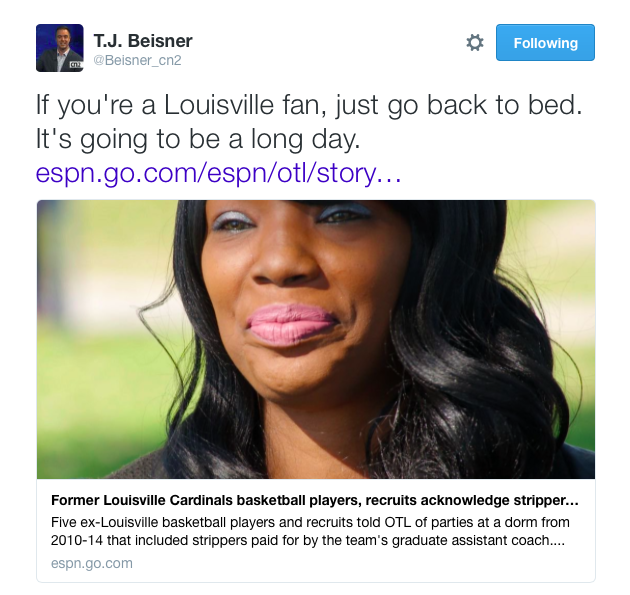 I think this tweet sums up the University of Louisville scandal thats getting ready to blow up on ESPN’s “Outside the Lines” investigation today:

ESPN and Sportscenter is on a roll his morning to prime its extended “Outside the Lines” expose’ featuring for the first time on camera, self-described former escort Katina Powell. Ms.Powell, 42, is the author of the damning “Breaking Cardinal Rules: Basketball and the Escort Queen,” published this month by details nearly two dozen stripping and sex parties from 2010 to 2014 inside Billy Minardi Hall, the on-campus dorm for athletes. The ESPN Outside the Lines extended show will air today, 10/20/15 @ 1:30est.

We are firmly in the era of coach responsibility. Get used to it. As we all know, the NCAA is investigating potential recruiting violations within the Louisville basketball program tied to the explosive allegations.  The world learned the NCAA is reaching out to multiple recruits who took visits to Louisville in the past few years to ask them about their experiences with women during those visits as part of the investigation. I’ve included the NCAA By Laws and revisions in the links below.

Most allegations are being verified, that she indeed, has proof that provided the “ladies of the night” for the basketball program players and recruits alike under the ask of former UL player and coach Andre’ McGee who was living with the players at the time.

Whether its possible that Coach Rick Pitino had no idea these “parties” were happening remains to be seen. Since August, we’ve heard that Pitino did not know, and the word was it was all organized solely by McGee during his tenure at UL. The jist is that McGee organized these parties to sway recruits. Louisville residents and fans have been chattering about McGee and its his responsibility, why go after Pitino. Powell, in her book and in the interview with Outside the Lines, said Louisville recruits JaQuan Lyle, Antonio Blakeney, Jordan Mickey and Terry Rozier all had sex during their recruiting visits. Lyle, Blakeney and Mickey either could not be reached for comment or declined to comment to ESPN OTL.

The OTL interview by ESPN reporters now shows there was even a set up for recruit Blakeney at the Embassy Suites by McGee and Powell after McGee has already left UL. So the saga is about to blow.    The book details communicae, intel about the parties and journals of dates that lasted over the course of 4 years, and involved dozens of players and or recruits, the speculation is swelling on what actually happened, if anything. The substantatiaon of allegations are coming swiftly from the ESPN interviews and producers, and comes back to the NCAA era of responsibility. U of L has no comment, but has their own investigation in the works.

In the real world, the NCAA revised some rules a few years back, and no longer can a head coach say “I didn’t know” and be absolved of the the wrongdoing. This is only the 3rd NCAA scandal to come to light under the revisions. Syracuse and SMU are under punishment for infractions ( more on that later today).
Like it or not, the coach is accountable, and who else may be accountable up the chain of command.

You’re going to be hearing a lot about NCAA Bylaw 11.1.1.1 from now on. It was referenced numerous times in other infractions reports. The rule went into effect on Oct. 30, 2012, and this is just the 3rd major case where we can see its full ramifications. (espn)

What is a head coach’s responsibility for ensuring NCAA violations do not occur within his or her program?

Take a late lunch or set your DVR for this upcoming expose by Outside the Lines today on ESPN @ 1:30 est.