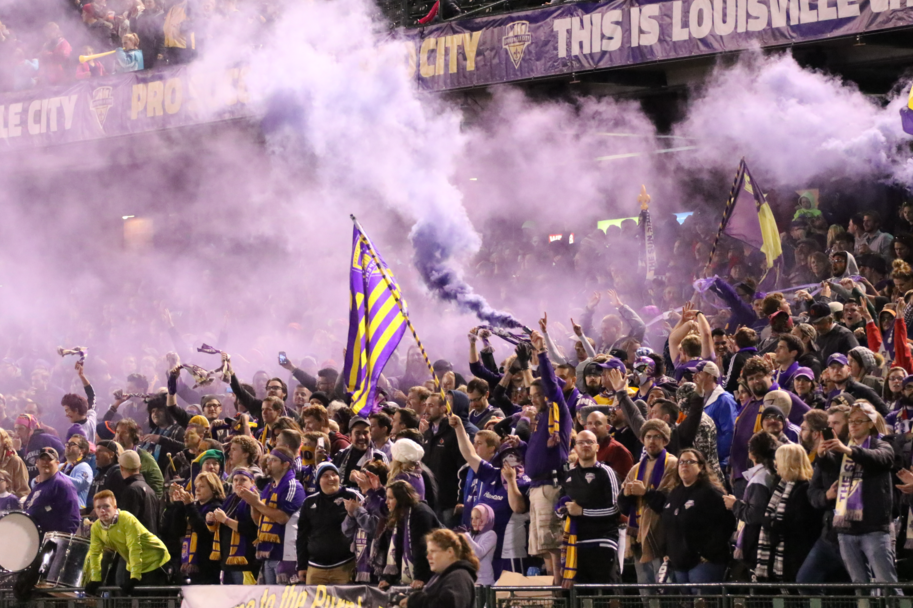 Louisville, KY., – A study conducted by Convention, Sports & Leisure and Legends and released last week by Louisville Forward confirms that a soccer-specific stadium is needed to maintain and grow professional soccer in Louisville.

“While Louisville Slugger Field has been a good first home for professional soccer, we must remain competitive, and sharing fields is not sustainable,” said Mayor Greg Fischer. “Louisville City Football Club is off to a great start, and we must embrace the growing demand for soccer in our city and strategically prepare for long-term growth.”

The Mayor added that, “Having vibrant arts, sports, entertainment and recreational activities is a core strategy for any competitive city,” but noted that, “we can only consider building a stadium if a significant portion of funding is committed by the private sector.”

The study calls for a soccer-specific stadium, with the ability to hold up to 10,000 seats, to be built by the year 2020. While no exact locations are named in the study, United Soccer League (USL) and Major League Soccer (MLS) – the two professional soccer leagues in the U.S. – prefer locating stadiums in or around downtown urban core areas, to enhance the market potential for professional soccer in terms of audience and growing fan base.

The site selection portion of the study is omitted for the obvious reason that the publication of that information likely would lead to land speculation that could ultimately cost the City (and the taxpayers) more money.

“The Louisville City ownership and entire organization appreciate Mayor Fischer’s and Metro Government’s support to conduct this study,” said team president Amanda Duffy. “We are thrilled this study confirms the support, steps and feasibility for a soccer-specific stadium in Louisville.  The success Louisville City has experienced on and off the field has been resounding, and we look forward to working closely with members of Metro Council and other civic leaders to take the next steps as recommended by this study.”

The call for a soccer-specific stadium builds on the growing demand for the sport. LCFC’s inaugural 2015 season exceeded expectations as the team averaged more than 7,000 fans per game, ranking the club second highest for attendance among 24 USL teams and more than double the league average attendance.

“Obviously, for us and the community the benefit of a stadium is that it’s a focal point for youth and an academy to come in and participate — play where the pros play,” said head coach James O’Connor. “There are so many factors that become critical to a soccer program. A stadium is definitely one of them.”

In addition to the city study, the Louisville Convention and Visitors Bureau is conducting a separate study that examines the feasibility of building an amateur youth sports complex, which could house sports such as soccer, lacrosse, field hockey, baseball and soccer, and draw new visitors to Louisville for regional and national tournaments.

“The Louisville CVB has a feasibility study currently underway on how a potential Sports Complex would create opportunities to grow our vibrant sports market,” said Karen Williams, president and CEO of the Louisville Convention & Visitors Bureau. “Working with the Louisville Sports Commission and others, Louisville has been successful with tourism business from hosting youth volleyball and basketball particularly. Adding youth soccer tournament capability would be another offering to add to this economic development mix.”

The final decision to build a soccer-specific stadium will require much more dialogue and public discussion with partners such as Louisville Metro Council, LCFC and citizens.

Recommendations presented in the study are the first step in the decision-making process and will be used to make an informed decision on whether to pursue the construction of a soccer-specific stadium.