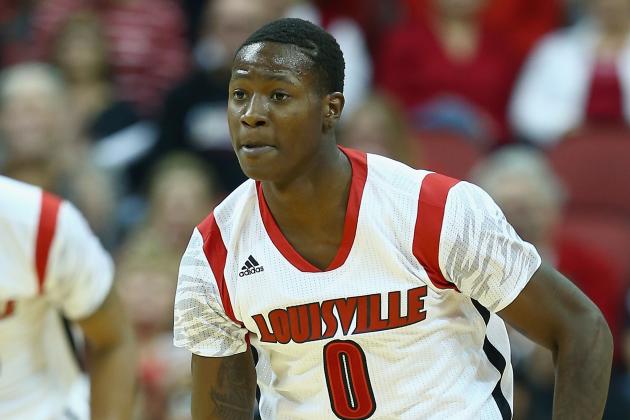 Rozier went to the Boston Celtics with the 16th overall selection, Harrell to the Houston Rockets with the 32nd pick

Guard Terry Rozier was selected in the first round by the Boston Celtics as the 16th overall pick in the draft, while forward Montrezl Harrell was taken in the second round by the Houston Rockets as the 32nd selection.

“We are so excited and so happy for Terry.,” said UofL Coach Rick Pitino.  “He’s one of the hardest workers with the most professional attitude any coach could want.  He is just scratching his potential and will work his tail off for the Celtics.  All of Card Nation is thrilled for him.”

“Obviously, both players have worked very hard to help make Louisville successful.  We hope that Louisville had played a big role in making them successful.”

Rozier led the Cardinals and was fourth in the ACC in scoring (17.1 ppg) last season and also led the ACC in steals (2.0 spg).  An All-ACC second team selection, Rozier was twice named ACC Player of the Week, including Dec. 22 after scoring a career-high 32 points at Western Ky.; and on Feb. 2.  He averaged 20.1 points in the Cards’ 17 road or neutral site games, including 20 points in Louisville’s nine conference road games.

A 6-1 guard from Youngstown, Ohio, Rozier and Notre Dame’s Jerian Grant were the only two players to rank among the top 10 in the ACC in scoring, steals and free throw percentage.  He made the second-highest scoring improvement in the ACC since last season, rising from his 7.0 average as a freshman to his final 17.1 average.  Named to the 2015 All-ACC Academic Men’s Basketball team, Rozier was among the top rebounding guards in the ACC, averaging 5.6 boards (23rd in ACC).

A 6-8 forward from Tarboro, N.C., Harrell was named to the 2015 All-ACC Academic Men’s Basketball team and was the ACC Player of the Week three times. He totaled 1,294 points in his three seasons (tied for 31st all-time at UofL). He finished his career with 777 rebounds, just 36 short of the top 15 in career rebounds at Louisville. He is Louisville’s career leader in dunks with 221 and slammed a school-record 97 dunks as a sophomore.

A total of 68 former Louisville players have been selected in the NBA Draft, including five in the last three years.  Last year, Russ Smith was selected by the Philadelphia 76ers in the second round of the 2014 NBA Draft with the 47th overall pick, and was subsequently traded to the New Orleans Pelicans.  Gorgui Dieng was a first-round selection and the 21st overall pick by the Utah Jazz in 2013, with his rights subsequently traded to the Minnesota Timberwolves, where he has played the last two seasons. Peyton Siva was a second round choice of the Detroit Pistons in 2013 with the 56th pick overall.