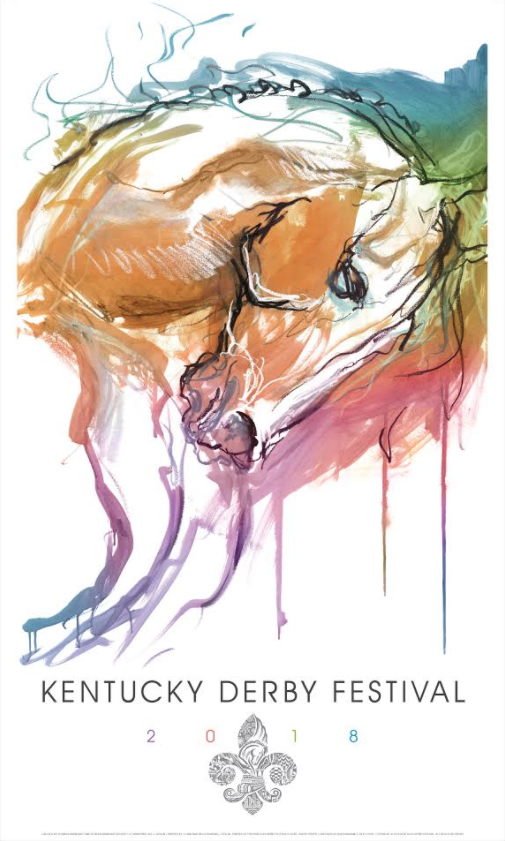 FANS CAN PRE-ORDER ONLINE THROUGH FEBRUARY 2

Louisville, KY.   – A sign of spring this morning as the Kentucky Derby Festival’s 2018 poster rolled off the presses at Clark & Riggs in Louisville. This year’s poster was designed by Louisville artists and twin sisters – Jeaneen Barnhart and Doreen Barnhart DeHart. This is a five-peat for the sisters, as they also collaborated on artwork for the Festival’s Official Poster in 1994, 1997, 2009, and 2014.

“Creating the Festival’s poster still means as much now as it did the first time around, maybe even more, as our passion for the both the Festival and the community have grown,” said Doreen Barnhart DeHart.

In the 2018 poster image, the “Spirited Pegasus” takes center stage and was created with a spontaneous flow of oil pastel sticks and oil wash brushstrokes. The poster also features the “Fleur de Festival” emblem, which is a composite of images that represent the Kentucky Derby Festival and its many events.

Said Jeaneen Barnhart, “We took a risk this year with a close-up to show a lot of detail. It’s been a work in progress for more than a year.”

The poster officially goes on sale March 2. However, for one week only, from January 26 – February 2, Festival Fans can pre-order the 2018 Limited Edition or Official poster at a 20% discount and FREE shipping. The Limited Edition Signed and Numbered posters normally retail for $75 and the Official poster normally retails for $30. They can be pre-ordered online here: 1213apparel.com/collections/kdf-posters/products/2018-kdf-poster.

Jeaneen specializes in painting and drawing, and Doreen in graphic design. The two have collaborated on a number of award-winning projects, in addition to their individual artistic accomplishments. Both sisters received Bachelor of Fine Arts degrees from Alfred University in New York. All of the Barnharts’ Festival posters are among the top selling images.

Over the years, the Derby Festival’s Official Poster Series has become a unique symbol of the community. Past designs decorate offices and homes throughout the city. Peter Max’s expressionistic “Bluegrass Pegasus” launched the series in 1981, and a stylistic and geographical mix of artists have been showcased over the years. The signed collector editions continue to significantly increase in value, and the quality of the Poster Series has been recognized worldwide.

The public will be able to see all the pieces of this year’s poster and merchandise line at “Festival Unveiled,” on March 1, at the Mellwood Arts Center. Tickets are $30 and can be purchased online at KDF.org. Citizens Union Bank and Four Roses Bourbon are Presenting Sponsors of the event.  Ladyfingers Catering is a Contributing Sponsor. Media Sponsors are LEO Weekly and 106.9 PLAY.